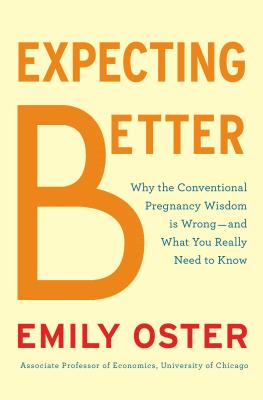 How to Fight the Pregnancy Establishment with Facts

Pregnancy unquestionably one of the most profound, meaningful experiences of adulthood can reduce otherwise intelligent women to, well, babies. We re told to avoid cold cuts, sushi, alcohol, and coffee, but aren t told"why"these are forbidden. Rules for prenatal testing are hard and fast and unexplained. Are these recommendations even correct? Are all of them right for every mom-to-be? In"Expecting Better, "award-winning economist Emily Oster proves that pregnancy rules are often misguided and sometimes flat-out wrong.
A mom-to-be herself, Oster debunks the myths of pregnancy using her particular mode of critical thinking: economics, the study of how we get what we want. Oster knows that the value of anything a home, an amniocentesis is in the eyes of the informed beholder, and like any complicated endeavor, pregnancy is not a one-size-fits-all affair. And yet medicine often treats it as such. Are doctors working from bad data? Are well-meaning friends and family perpetuating false myths and raising unfounded concerns? Oster's answer is yes, and often.
Pregnant women face an endless stream of decisions, from the casual (Can I eat this?) to the frightening (Is it worth risking a miscarriage to test for genetic defects?)."Expecting Better"presents the hard facts and real-world advice you ll never get at the doctor's office or in the existing literature. Oster's revelatory work identifies everything from the real effects of caffeine and tobacco to the surprising dangers of gardening.
Any expectant mother knows that the health of her baby is paramount, but she will be less anxious and better able to enjoy a healthy pregnancy if she is informed . . . and can have the occasional glass of wine.
* * *
Numbers are not subject to someone else's interpretation math doesn t lie. Expectant economist Emily Oster set out to inform parents-to-be about the truth of pregnancy using the most up-to-date data so that they can make the best decisions for their pregnancies. The results she found were often very surprising


. It's fine to have the occasional glass of wine even one every day in the second and third trimesters.
. There is nothing to fear from sushi, but do stay away from raw milk cheese.
. Sardines and herring are the fish of choice to give your child those few extra IQ points.
. There is no evidence that bed rest is helpful in preventing or treating"any"complications of pregnancy.
. Many unnecessary labor inductions could be avoided by simply staying hydrated.
. Epidurals are great for pain relief and fine for your baby, but they do carry some risks for mom.
. Limiting women to ice chips during labor is an antiquated practice; you should at least be able to sneak in some Gatorade.
. You shouldn t worry about dyeing your hair or cleaning the cat's litter box, but gardening while pregnant can actually be risky.
. Hot tubs, hot baths, hot yoga: avoid (at least during the first trimester).
. You should be more worried about gaining too little weight during pregnancy than gaining too much.
. Most exercise during pregnancy is fine (no rock climbing ), but there isn t much evidence that it has benefits. Except for exercising your pelvic floor with Kegels: that you should be doing.
. Your eggs do not have a 35-year-old sell-by date: plenty of women get pregnant after 35 and there is no sudden drop in fertility on your birthday.
. Miscarriage risks from tests like the CVS and Amniocentesis are far lower than cited by most doctors.
. Pregnancy nausea may be unpleasant, but it's a good sign: women who are sick are less likely to miscarry.

Emily Oster is an associate professor of economics at the University of Chicago Booth School of Business. She was a speaker at the 2007 TED conference and her work has been featured in "The New York Times, The Wall Street Journal, Forbes," and "Esquire." Oster is married to economist Jesse Shapiro and is the also the daughter of two economists. She has one child, Penelope."
Loading...
or
Not Currently Available for Direct Purchase