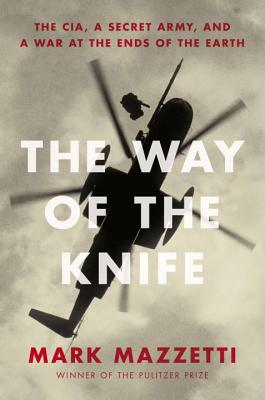 The Way of the Knife

The CIA, a Secret Army, and a War at the Ends of the Earth

"A Pulitzer Prize-winning reporter's riveting account of the transformation of the CIA and America's special operations forces into man-hunting and killing machines in the world's dark spaces: the new American way of war"
The most momentous change in American warfare over the past decade has taken place away from the battlefields of Afghanistan and Iraq, in the corners of the world where large armies can't go. "The Way of the Knife" is the untold story of that shadow war: a campaign that has blurred the lines between soldiers and spies and lowered the bar for waging war across the globe. America has pursued its enemies with killer drones and special operations troops; trained privateers for assassination missions and used them to set up clandestine spying networks; and relied on mercurial dictators, untrustworthy foreign intelligence services, and proxy armies.
This new approach to war has been embraced by Washington as a lower risk, lower cost alternative to the messy wars of occupation and has been championed as a clean and surgical way of conflict. But the knife has created enemies just as it has killed them. It has fomented resentments among allies, fueled instability, and created new weapons unbound by the normal rules of accountability during wartime.
Mark Mazzetti tracks an astonishing cast of characters on the ground in the shadow war, from a CIA officer dropped into the tribal areas to learn the hard way how the spy games in Pakistan are played to the chain-smoking Pentagon official running an off-the-books spy operation, from a Virginia socialite whom the Pentagon hired to gather intelligence about militants in Somalia to a CIA contractor imprisoned in Lahore after going off the leash.
At the heart of the book is the story of two proud and rival entities, the CIA and the American military, elbowing each other for supremacy. Sometimes, as with the raid that killed Osama bin Laden, their efforts have been perfectly coordinated. Other times, including the failed operations disclosed here for the first time, they have not. For better or worse, their struggles will define American national security in the years to come.

MARK MAZZETTI is a national security correspondent for "The New York Times." In 2009, he shared a Pulitzer Prize for reporting on the intensifying violence in Pakistan and Afghanistan and Washington s response, and he has won numerous other major journalism awards, including the George Polk Award (with colleague Dexter Filkins) and the Livingston Award, for breaking the story of the CIA's destruction of interrogation videotapes. Mazzetti has also written for the "Los Angeles Times," "U.S. News & World Report," and "The Economist." He lives in Washington, D.C."