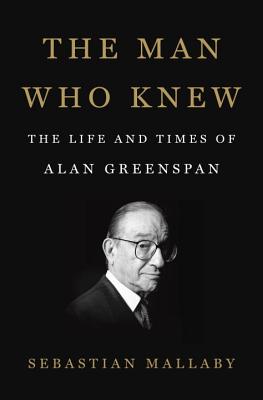 The Man Who Knew (Hardcover)

The Life and Times of Alan Greenspan

Sebastian Mallaby's magisterial biography of Alan Greenspan, the product of over five years of research based on untrammeled access to his subject and his closest professional and personal intimates, brings into vivid focus the mysterious point where the government and the economy meet. To understand Greenspan's story is to see the economic and political landscape of the last 30 years--and the presidency from Reagan to George W. Bush--in a whole new light. As the most influential economic statesman of his age, Greenspan spent a lifetime grappling with a momentous shift: the transformation of finance from the fixed and regulated system of the post-war era to the free-for-all of the past quarter century. The story of Greenspan is also the story of the making of modern finance, for good and for ill.

Greenspan's life is a quintessential American success story: raised by a single mother in the Jewish émigré community of Washington Heights, he was a math prodigy who found a niche as a stats-crunching consultant. A master at explaining the economic weather to captains of industry, he translated that skill into advising Richard Nixon in his 1968 campaign. This led to a perch on the White House Council of Economic Advisers, and then to a dazzling array of business and government roles, from which the path to the Fed was relatively clear. A fire-breathing libertarian and disciple of Ayn Rand in his youth who once called the Fed's creation a historic mistake, Mallaby shows how Greenspan reinvented himself as a pragmatist once in power. In his analysis, and in his core mission of keeping inflation in check, he was a maestro indeed, and hailed as such. At his retirement in 2006, he was lauded as the age's necessary man, the veritable God in the machine, the global economy's avatar. His memoirs sold for record sums to publishers around the world.

But then came 2008. Mallaby's story lands with both feet on the great crash which did so much to damage Alan Greenspan's reputation. Mallaby argues that the conventional wisdom is off base: Greenspan wasn't a naïve ideologue who believed greater regulation was unnecessary. He had pressed for greater regulation of some key areas of finance over the years, and had gotten nowhere. To argue that he didn't know the risks in irrational markets is to miss the point. He knew more than almost anyone; the question is why he didn't act, and whether anyone else could or would have. A close reading of Greenspan's life provides fascinating answers to these questions, answers whose lessons we would do well to heed. Because perhaps Mallaby's greatest lesson is that economic statesmanship, like political statesmanship, is the art of the possible. The Man Who Knew is a searching reckoning with what exactly comprised the art, and the possible, in the career of Alan Greenspan.

Sebastian Mallaby is the author of several books, including the bestselling More Money Than God. A former Financial Times contributing editor and two-time Pulitzer Prize finalist, Mallaby is the Paul A. Volcker Senior Fellow for International Economics at the Council on Foreign Relations.

Praise For The Man Who Knew: The Life and Times of Alan Greenspan…

“An impressive achievement and an important piece of scholarship that both deserves and rewards the careful reader…  A brilliant rendering of key moments in recent economic and financial history that provides the context needed to appreciate Greenspan’s extraordinary mixed legacy.” – Peter Fisher, International Finance

“Highly recommended…. anyone with an interest in postwar U.S. economic and political history will enjoy The Man Who Knew.” –Ben Bernanke

“While Greenspan was (and is) a more capable economist than he gets credit for these days, he was an even better politician….This view of Greenspan as a political animal is central to Mallaby’s account.  It is also, along with the often amusing depictions of Greenspan’s personal life, what makes it so much fun to read….. [An] excellent biography.”- New York Times Book Review

“Mallaby’s masterful biography—which doubles as an excellent economic history of the past three decades—tells a story of Greenspan’s technocratic ascent, from his modest boyhood in New York City, to a young adulthood colored by his philosophical attraction to the antigovernment libertarianism of the novelist Ayn Rand, to his career as a high-flying economic consultant, and finally to his rise to the pinnacle of power at the Fed.”— Foreign Affairs

“A tour de force — the most deeply reported work on the dry art of central banking since William Greider’s “Secrets of the Temple” (1988). But Greider’s work was flawed because he pushed his reporting through a meat grinder of questionable economic theories. Mallaby avoids that pitfall. Much like the man he profiles, Mallaby shows a solid understanding of competing economic — and political — theories, without tying himself inextricably to any one.”— The Washington Post

“The Man Who Knew is a tour de force, the story not just of Alan Greenspan’s career but equally of America’s economic triumphs and failures over five decades. This carefully researched and elegantly written book will be essential reading for those who aspire to make policy and for anyone who wants to divine what drives the choices that our leaders make.” —The Wall Street Journal

“In a superb new book, the product of more than five years’ research, Sebastian Mallaby helps history make up its mind about Alan Greenspan, the man hailed in 2000 by Phil Gramm, a former senator, as ‘the best central banker we have ever had,’ but now blamed for the financial crisis of 2007-08.” —The Economist

“Exceptional… Deeply researched and elegantly written… As a description of the politics and pressures under which modern independent central banking has to operate, the book is incomparable.” —Financial Times

“Mallaby pulls back the curtain on the controversial Fed chairman…and takes a fresh look at his record.” —Esquire

“Economics is dubbed the dreary science, but as this comprehensive and absorbing biography reveals, economists can certainly enjoy lively and interesting lives…. Mallaby strives to fairly consider Greenspan’s successes and failures in this balanced account….A portrait of a many-faceted and brilliant man far more appealing than the stolid technocrat who appeared before Congress and the public during his long tenure (1987–2006) as chairmanof the Federal Reserve.”—Booklist

“Thorough, balanced, and well informed…A masterful, detailed portrait of one of the leading economic figures of our time.”—Publishers Weekly

“The astonishing story of  how a solitary young man, who found solace in numbers, became the world’s most powerful economic decision-maker, presiding over the revolution in finance that touches everyone.  With  judgment and authority, The Man Who Knew takes us inside the great economic crises of our times-- and provides insight for the crises and turmoil yet to come.” —Daniel Yergin, author of The Prize: the Epic Quest for Oil, Money, and Power and of The Quest: Energy, Security, and the Remaking of the Modern World

“One of the best books I’ve read recently isn’t out until October. It is a biography of Alan Greenspan titled, “The Man Who Knew: The Life and Times of Alan Greenspan.” Mr. Greenspan is a fascinating subject because for so long he was considered a genius, only to later be blamed for the financial crisis. Mr. Mallaby does an exquisite job going beyond these two versions of the Greenspan narrative and taking the reader inside the complicated mind of a man who may have had one of the largest ever influences over our economy.” —Andrew Ross Sorkin, The New York Times

“A masterful biography of Alan Greenspan, full of astute insights and deft judgments about the career of one of the most consequential, and yet enigmatic, economic statesman of our era, a book that provides a unique and fascinating window into the major economic policy debates of the last 50 years” —Liaquat Ahamed, Pulitzer-Prize winning author of Lords of Finance: The Bankers Who Broke the World

"Mallaby has a rare ability to blend the stories of powerful people with insights into influential institutions and formidable policy challenges. 'The Man Who Knew' is a superb biography -- as well as an economic history, political profile, and monetary policy primer. Careful research, fine writing, an intriguing narrative, and a cautionary tale: This book has it all."—Robert B. Zoellick, Former President of the World Bank, US Trade Representative, and US Deputy Secretary of State

"A fascinating and balanced study of arguably the most important figure of the post-war global financial scene.”—Mervyn King, Former Governor of the Bank of England and Chairman of its Monetary Policy Committee

"Admire him or despise him, Alan Greenspan was the preeminent financial statesman of the post-war era. But Sebastian Mallaby’s magisterial biography casts him as something more (and more intriguing) than that: a masterly and mesmerizing politician. Whether counseling Richard Nixon on the race-freighted Southern strategy, scheming with Watergate felon Charles Colson on a plan to neuter the Federal Reserve’s independence, or waging bureaucratic war against Henry Kissinger (and winning!), Greenspan was cunning, stealthy, and ruthless, neck deep in the political intrigues of his era—less the bloodless monetary technocrat of lore than the J. Edgar Hoover of economics. In riveting, page-turning fashion, The Man Who Knew reveals the man in full.”—John Heilemann, managing editor of Bloomberg Politics, host of With All Due Respect, author of Game Change and Double Down

“A splendid biography—compelling, readable, provocative, richly researched, brimming with authorial intelligence. A rich, subtle portrait of a complex and surprisingly vulnerable human being. The Man Who Knew is a courageous book, for it reckons with Greenspan’s shortcomings with unbridled honesty. Its judgments are all the more devastating because Mallaby is scrupulously fair, as unafraid to praise as he is to critique. And as he leads us through the passages of Greenspan’s life, Mallaby takes us on a tour of the sizzling financial dramas and of the great intellectual debates of the postwar years, from the inflation agonies of Gerald Ford to the mortgage bubble of the early 2000s. The Man Who Knew will surely become the definitive Greenspan biography.” —Roger Lowenstein, author of America’s Bank: The Epic Struggle to Create the Federal Reserve, and When Genius Failed.
or support indie stores by buying on
Copyright © 2020 American Booksellers Association