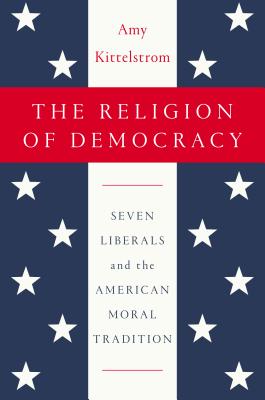 The Religion of Democracy (Hardcover)

A history of religion's role in the American liberal tradition through the eyes of seven transformative thinkers
Today we associate liberal thought and politicswith secularism. When we argue over whetherthe nation's founders meant to keep religion outof politics, the godless side is said to be liberal. Butthe role of religion in American politics has alwaysbeen far more nuanced and complex than today sdebates would suggest and closer to the heartof American intellectual life than is commonlyunderstood. American democracy was intended byits creators to be more than just a political system, and in The Religion of Democracy, historian AmyKittelstrom shows how religion and democracyhave worked together as universal ideals inAmerican culture and as guides to moral actionand the social practice of treating one another asequals who deserve to be free.
The first people in the world to call themselves liberals were New England Christians in the earlyrepublic, for whom being liberal meant beingreceptive to a range of beliefs and values. The storybegins in the mid-eighteenth century, when thefirst Boston liberals brought the Enlightenmentinto Reformation Christianity, tying equality andliberty to the human soul at the same momentthese root concepts were being tied to democracy.The nineteenth century saw the development ofa robust liberal intellectual culture in America, built on open-minded pursuit of truth andacceptance of human diversity. By the twentiethcentury, what had begun in Boston as a narrow, patrician democracy transformed into a religionof democracy in which the new liberals of modernAmerica believed that where different viewpointsoverlap, common truth is revealed. The coreAmerican principles of liberty and equality werenever free from religion but full of religion.
The Religion of Democracy re-creates the liberalconversation from the eighteenth century to thetwentieth by tracing the lived connections amongseven thinkers through whom they knew, whatthey read and wrote, where they went, and howthey expressed their opinions from John Adamsto William James to Jane Addams; from Bostonto Chicago to Berkeley. Sweeping and ambitious, The Religion of Democracy is a lively narrative ofquintessentially American ideas as they wereforged, debated, and remade across our history.

Amy Kittelstrom is an associate professorof history at Sonoma State University, specializingin nineteenth-century American thinkers and theirsociopolitical context. She has published articles andreviews in the Journal of American History, Journal of theAmerican Academy of Religion, and The Chronicle of HigherEducation. She received her Ph.D. in history from BostonUniversity and is a past fellow of the Center for Religionand American Life at Yale, the Charles Warren Centerat Harvard, and the Center for the Study of Religionat Princeton."
or
Not Currently Available for Direct Purchase
Copyright © 2020 American Booksellers Association