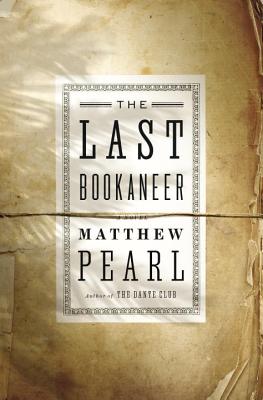 "This swashbuckling tale of greed and great literature will remind you why Pearl is the reigning king of popular literary historical thrillers. His latest is guaranteed to delight lovers of history and mystery."--Library Journal (starred review) book'a-neer' (bŏŏk'ka-nēr'), n. a literary pirate; an individual capable of doing all that must be done in the universe of books that publishers, authors, and readers must not have a part in London, 1890--Pen Davenport is the most infamous bookaneer in Europe. A master of disguise, he makes his living stalking harbors, coffeehouses, and print shops for the latest manuscript to steal. But this golden age of publishing is on the verge of collapse. For a hundred years, loose copyright laws and a hungry reading public created a unique opportunity: books could easily be published without an author's permission. Authors gained fame but suffered financially--Charles Dickens, Mark Twain, Robert Louis Stevenson, to name a few--but publishers reaped enormous profits while readers bought books inexpensively. Yet on the eve of the twentieth century, a new international treaty is signed to grind this literary underground to a sharp halt. The bookaneers are on the verge of extinction. From the author of The Dante Club, Matthew Pearl, The Last Bookaneer is the astonishing story of these literary thieves' epic final heist. On the island of Samoa, a dying Robert Louis Stevenson labors over a new novel. The thought of one last book from the great author fires the imaginations of the bookaneers, and soon Davenport sets out for the South Pacific island. As always, Davenport is reluctantly accompanied by his assistant Fergins, who is whisked across the world for one final caper. Fergins soon discovers the supreme thrill of aiding Davenport in his quest to steal Stevenson's manuscript and make a fortune before the new treaty ends the bookaneers' trade forever. But Davenport is hardly the only bookaneer with a mind to pirate Stevenson's last novel. His longtime adversary, the monstrous Belial, appears on the island, and soon Davenport, Fergins, and Belial find themselves embroiled in a conflict larger, perhaps, than literature itself. In The Last Bookaneer, Pearl crafts a finely wrought tale about a showdown between brilliant men in the last great act of their professions. It is nothing short of a page-turning journey to the heart of a lost era.

MATTHEW PEARL is the award-winning and bestselling author of the novels The Dante Club, The Poe Shadow, The Last Dickens, and The Technologists. His books have been New York Times bestsellers and international bestsellers translated into more than thirty languages.
Loading...
or
Not Currently Available for Direct Purchase