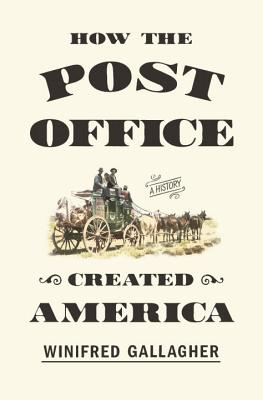 A masterful history of a long underappreciated institution, How the Post Office Created America examines the surprising role of the postal service in our nation’s political, social, economic, and physical development.

The founders established the post office before they had even signed the Declaration of Independence, and for a very long time, it was the U.S. government’s largest and most important endeavor—indeed, it was the government for most citizens. This was no conventional mail network but the central nervous system of the new body politic, designed to bind thirteen quarrelsome colonies into the United States by delivering news about public affairs to every citizen—a radical idea that appalled Europe’s great powers. America’s uniquely democratic post powerfully shaped its lively, argumentative culture of uncensored ideas and opinions and made it the world’s information and communications superpower with astonishing speed.

Winifred Gallagher presents the history of the post office as America’s own story, told from a fresh perspective over more than two centuries. The mandate to deliver the mail—then “the media”—imposed the federal footprint on vast, often contested parts of the continent and transformed a wilderness into a social landscape of post roads and villages centered on post offices. The post was the catalyst of the nation’s transportation grid, from the stagecoach lines to the airlines, and the lifeline of the great migration from the Atlantic to the Pacific. It enabled America to shift from an agrarian to an industrial economy and to develop the publishing industry, the consumer culture, and the political party system. Still one of the country’s two major civilian employers, the post was the first to hire women, African Americans, and other minorities for positions in public life.

Starved by two world wars and the Great Depression, confronted with the country’s increasingly anti-institutional mind-set, and struggling with its doubled mail volume, the post stumbled badly in the turbulent 1960s. Distracted by the ensuing modernization of its traditional services, however, it failed to transition from paper mail to email, which prescient observers saw as its logical next step. Now the post office is at a crossroads. Before deciding its future, Americans should understand what this grand yet overlooked institution has accomplished since 1775 and consider what it should and could contribute in the twenty-first century.

Gallagher argues that now, more than ever before, the imperiled post office deserves this effort, because just as the founders anticipated, it created forward-looking, communication-oriented, idea-driven America.

Praise For How the Post Office Created America: A History…

“[How the Post Office Created America is] an ode to a little-heralded but flagship government enterprise. [Gallagher] reminds us … that the post office forged a communications revolution just as far-reaching as the later telegraph and internet revolutions.”—The New York Times Book Review

“Impressively researched…Gallagher connects the transformations of the Post Office with broader economic, socio-cultural, and political changes affecting the country.”—The Nation

“Fascinating…. This readable book relays the complicated history of an institution that is thoroughly integrated into American life.”—Library Journal

“’The history of its Post Office is nothing less than the story of America,’ Ms. Gallagher’s opening sentence declares, and in this lively book she makes the case well.”—Wall Street Journal

“Gallagher makes a strong case for [the post office’s] historical importance in this brisk history.”—Publishers Weekly

“Long the most important activity of the federal government, the Post Office knit together America's geographically spread out democracy. Winifred Gallagher fluently illuminates not only the fascinating, picturesque past, but also the various possible futures of the American postal service.” —Daniel Walker Howe, Pulitzer-Prize-winning author of What Hath God Wrought: The Transformation of America, 1815-1848

“Winifred Gallagher makes a big claim in the first sentence of her new book—‘The history of the Post Office is nothing less than the story of America.’ And then, in a sweeping tour of American and postal history from the colonial period to the present, she makes us all believers. Highly recommended for students, scholars, and those who care about this nation’s past.”—David Nasaw, author of The Patriarch: The Remarkable Life and Turbulent Times of Joseph P. Kennedy and Andrew Carnegie

“At first glance, a book on the history of the post office seems an unpromising prospect for a page-turner. But I found it so fascinating that I could hardly put it down. This book is a winner, based on deep knowledge and research that will reach a broad audience with a story that will enhance their appreciation and understanding of the post office and its contribution to American life.”—James McPherson, Pulitzer Prize-winning historian and author of Tried by War and Embattled Rebel

Winifred Gallagher's books include Rapt: Attention and the Focused Life (a New York Times bestseller), New: Understanding Our Need for Novelty and Change, House Thinking, Just the Way You Are (a New York Times Notable Book), and The Power of Place. She has written for numerous publications, including the Atlantic, Rolling Stone, and the New York Times. She lives in New York City and Dubois, Wyoming.
Loading...
or
Not Currently Available for Direct Purchase