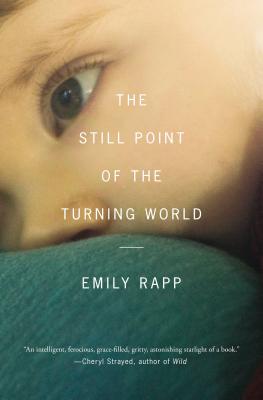 The Still Point of the Turning World

Like all mothers, Emily Rapp had ambitious plans for her first and only child, Ronan. He would be smart, loyal, physically fearless, and level-headed, but fun. He would be good at crossword puzzles like his father. He would be an avid skier like his mother. Rapp would speak to him in foreign languages and give him the best education.
But all of these plans changed when Ronan was diagnosed at nine months old with Tay-Sachs disease, a rare and always-fatal degenerative disorder. Ronan was not expected to live beyond the age of three; he would be permanently stalled at a developmental level of six months. Rapp and her husband were forced to re-evaluate everything they thought they knew about parenting. They would have to learn to live with their child in the moment; to find happiness in the midst of sorrow; to parent without a future.
"The Still Point of the Turning World" is the story of a mother's journey through grief and beyond it. Rapp's response to her son's diagnosis was a belief that she needed to make my world big to make sense of her family's situation through art, literature, philosophy, theology and myth. Drawing on a broad range of thinkers and writers, from C.S. Lewis to Sylvia Plath, Hegel to Mary Shelley's "Frankenstein," Rapp learns what wisdom there is to be gained from parenting a terminally ill child. In luminous, exquisitely moving prose she re-examines our most fundamental assumptions about what it means to be a good parent, to be a success, and to live a meaningful life.

A former Fulbright scholar and graduate of Harvard Divinity School, Emily Rapp is the author of "Poster Child: A Memoir." She is the recipient of a Rona Jaffe Writers' Award, a James A. Michener Fellowship at the University of Texas-Austin, and the Philip Roth Writer-in-Residence fellowship at Bucknell University. She is currently professor of creative writing and literature at the Santa FeUniversity of Art and Design and a faculty member in the University of California-Riverside MFA Program. Her writing has appeared in "Slate," "Salon," and the "New York Times.""
Loading...
or
Not Currently Available for Direct Purchase