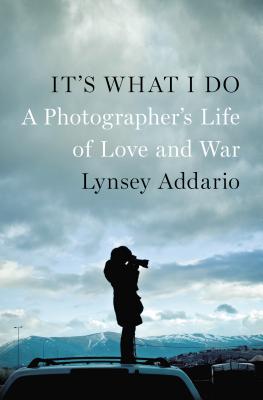 It's What I Do (Hardcover)

A Photographer's Life of Love and War

War photographer Lynsey Addario’s memoir It’s What I Do is the story of how the relentless pursuit of truth, in virtually every major theater of war in the twenty-first century, has shaped her life. What she does, with clarity, beauty, and candor, is to document, often in their most extreme moments, the complex lives of others. It’s her work, but it’s much more than that: it’s her singular calling.

Lynsey Addario was just finding her way as a young photographer when September 11 changed the world. One of the few photojournalists with experience in Afghanistan, she gets the call to return and cover the American invasion. She makes a decision she would often find herself making—not to stay home, not to lead a quiet or predictable life, but to set out across the world, face the chaos of crisis, and make a name for herself.

Addario finds a way to travel with a purpose. She photographs the Afghan people before and after the Taliban reign, the civilian casualties and misunderstood insurgents of the Iraq War, as well as the burned villages and countless dead in Darfur. She exposes a culture of violence against women in the Congo and tells the riveting story of her headline-making kidnapping by pro-Qaddafi forces in the Libyan civil war.

Addario takes bravery for granted but she is not fearless. She uses her fear and it creates empathy; it is that feeling, that empathy, that is essential to her work. We see this clearly on display as she interviews rape victims in the Congo, or photographs a fallen soldier with whom she had been embedded in Iraq, or documents the tragic lives of starving Somali children. Lynsey takes us there and we begin to understand how getting to the hard truth trumps fear.

As a woman photojournalist determined to be taken as seriously as her male peers, Addario fights her way into a boys’ club of a profession. Rather than choose between her personal life and her career, Addario learns to strike a necessary balance. In the man who will become her husband, she finds at last a real love to complement her work, not take away from it, and as a new mother, she gains an all the more intensely personal understanding of the fragility of life.

Watching uprisings unfold and people fight to the death for their freedom, Addario understands she is documenting not only news but also the fate of society. It’s What I Do is more than just a snapshot of life on the front lines; it is witness to the human cost of war.

Lynsey Addario is an American photojournalist whose work appears regularly in The New York Times, National Geographic, and Time magazine. She has covered conflicts in Afghanistan, Iraq, Lebanon, Darfur, and the Congo, and has received numerous awards, including the MacArthur Genius Grant. In 2009, she was awarded the Pulitzer Prize as part of the New York Times team for International Reporting.

Praise For It's What I Do: A Photographer's Life of Love and War…

Boston Globe:
“Beautifully written and vividly illustrated with her images — which are stunningly cinematic, often strange, always evocative — the book helps us understand not only what would lead a young woman to pursue such a dangerous and difficult profession, but why she is so good at it. Lens to her eye, Addario is an artist of empathy, a witness not to grand ideas about human sacrifice and suffering, but to human beings, simply being.”

Entertainment Weekly:
“The opening scene of Lynsey Addario’s memoir sucker punches you like a cold hard fist. She illuminates the daily frustrations of working within the confines of what the host culture expects from a member of her sex and her constant fight for respect from her male journalist peers and American soldiers. Always she leads with her chin, whether she’s on the ground in hostile territory or discussing politics.”

Los Angeles Times:
“[A] richly illustrated memoir.  [Addario] conveys well her unstated mission to stir the emotions of people like herself, born into relative security and prosperity, nudging them out of their comfort zones with visual evidence of horrors they might do something about. It is a diary of an empathetic young woman who makes understanding the wider world around her a professional calling.”

San Francisco Chronicle:
“Addario’s narrative about growing up as one of four daughters born to hairdressers in Los Angeles and working her way up to being one of the world’s most accomplished photojournalists, male or female, is riveting. [She] thoughtfully shows how exhilarating and demanding it is to cover the most difficult assignments in the world. Addario is a shining example of someone who has been able to “have it all,” but she has worked hard and absolutely suffered to get where she is. My hope is that she continues to live the life less traveled with her family, as I will be waiting for her next book with great anticipation.”

Washington Post:
“[An] unflinching memoir. [Addario’s] book, woven through with images from her travels, offers insight into international events and the challenges faced by the journalists who capture them.”

Associated Press:
“[Addario’s] ability to capture… vulnerability in her subjects, often in extreme circumstances, has propelled Addario to the top of her competitive field.”

Dallas Morning News:
“A rare gift: an intimate look into the personal and professional life of a war correspondent… a powerful read… This memoir packs a punch because of Addario’s personal risks. But some of the power in this book comes from the humanity she holds on to despite the horrors she witnesses. [It’s What I Do] should be read, processed and mulled over in its entirety….in [Addario’s] words and photos, readers will see that war isn’t simply a matter of black and white, of who’s right and who’s wrong. There are as many shades of gray as there are sides to every story.”

Kirkus (starred review):
“A remarkable journalistic achievement from a Pulitzer Prize and MacArthur Fellowship winner that crystalizes the last 10 years of global war and strife while candidly portraying the intimate life of a female photojournalist. Told with unflinching candor, the award-winning photographer brings an incredible sense of humanity to all the battlefields of her life. Especially affecting is the way in which Addario conveys the role of gender and how being a woman has impacted every aspect of her personal and professional lives. Whether dealing with ultrareligious zealots or overly demanding editors, being a woman with a camera has never been an easy task. A brutally real and unrelentingly raw memoir that is as inspiring as it is horrific.”

Publishers Weekly:
“A highly readable and thoroughly engaging memoir…. Addario’s memoir brilliantly succeeds not only as a personal and professional narrative but also as an illuminating homage to photojournalism’s role in documenting suffering and injustice, and its potential to influence public opinion and official policy.”

Booklist:
“Addario has written a page-turner of a memoir describing her war coverage and why and how she fell into—and stayed in—such a dangerous job. This ‘extraordinary profession’—though exhilarating and frightening, it ‘feels more like a commitment, a responsibility, a calling’—is what she does, and the many photographs scattered throughout this riveting book prove that she does it magnificently.”

Tim Weiner, author of Legacy of Ashes and Enemies:
“It’s What I Do is as brilliant as Addario’s pictures—and she’s the greatest photographer of our war-torn time. She’s been kidnapped, nearly killed, while capturing truth and beauty in the world’s worst places. She’s a miracle. So is this book.”

Dexter Filkins, author of The Forever War:
“Lynsey Addario’s book is like her life: big, beautiful, and utterly singular. With the whole world as her backdrop, Addario embarks on an extraordinary adventure whose overriding effect is to remind of us what unites us all.”

Jon Lee Anderson, staff writer for The New Yorker and author of The Fall of Baghdad:
“A gifted chronicler of her life and times, Lynsey Addario stands at the forefront of her generation of photojournalists, young men and women who have come of age during the brutal years of endless war since 9/11. A uniquely driven and courageous woman, Addario is also possessed of great quantities of humor and humanity. It’s What I Do is the riveting, unforgettable account of an extraordinary life lived at the very edge.”

John Prendergast, founding director of the Enough Project:
“A life as a war photographer has few parallels in terms of risk and reward, fear and courage, pain and promise. Lynsey Addario has seen, experienced, and photographed things that most of us cannot imagine. The brain and heart behind her extraordinary photographic eye pulls us inexorably closer to the center of each story she pursues, no matter what the cost or danger.”