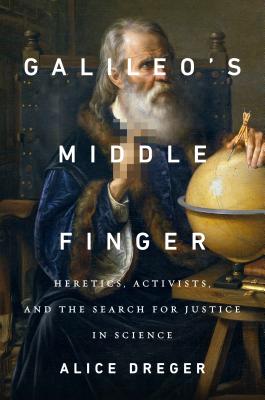 Heretics, Activists, and the Search for Justice in Science

An impassioned defense of intellectual freedom and a clarion call to intellectual responsibility, Galileo’s Middle Finger is one American’s eye-opening story of life in the trenches of scientific controversy. For two decades, historian Alice Dreger has led a life of extraordinary engagement, combining activist service to victims of unethical medical research with defense of scientists whose work has outraged identity politics activists. With spirit and wit, Dreger offers in Galileo’s Middle Finger an unforgettable vision of the importance of rigorous truth seeking in today’s America, where both the free press and free scholarly inquiry struggle under dire economic and political threats.

This illuminating chronicle begins with Dreger’s own research into the treatment of people born intersex (once called hermaphrodites). Realization of the shocking surgical and ethical abuses conducted in the name of “normalizing” intersex children’s gender identities moved Dreger to become an internationally recognized patient rights’ activist. But even as the intersex rights movement succeeded, Dreger began to realize how some fellow progressive activists were employing lies and personal attacks to silence scientists whose data revealed uncomfortable truths about humans. In researching one such case, Dreger suddenly became the target of just these kinds of attacks.

Troubled, she decided to try to understand more—to travel the country to ferret out the truth behind various controversies, to obtain a global view of the nature and costs of these battles. Galileo’s Middle Finger describes Dreger’s long and harrowing journeys between the two camps for which she felt equal empathy: social justice activists determined to win and researchers determined to put hard truths before comfort. Ultimately what emerges is a lesson about the intertwining of justice and of truth—and a lesson of the importance of responsible scholars and journalists to our fragile democracy.

Booklist (starred review)
"A crusader in the mold of muckrackers from a century ago, Dreger doesn’t try to hide her politics or her agenda. Instead she advocates for change intelligently and passionately. Highly recommended."

Kirkus (starred review):
“Let us be grateful that there are writers like Dreger who have the wits and the guts to fight for truth.”

Jared Diamond, author of Guns, Germs, and Steel and The World until Yesterday
“Alice Dreger would win a prize for this year’s most gripping novel, except for one thing: her stories are true, and this isn’t a novel.  Instead, it’s an exciting account of complicated good guys and bad guys, and the pursuit of justice.”

ALICE DREGER is a professor of clinical medical humanities and bioethics at Northwestern University’s Feinberg School of Medicine and the author of Hermaphrodites and the Medical Invention of Sex and One of Us: Conjoined Twins and the Future of Normal. Her work has been discussed in The New York Times, The New Yorker, and Science and on CNN, and her op-eds have appeared in The New York Times, The Atlantic, The Washington Post, and The Wall Street Journal. She has appeared as a guest expert on Oprah, Savage Love, Good Morning America, and NPR. Her TED talk, “Is Anatomy Destiny?,” has been viewed more than 850,000 times.

Praise For Galileo's Middle Finger: Heretics, Activists, and the Search for Justice in Science…

New York Times Book Review
“[A] smart, delightful book. Galileo’s Middle Finger is many things: a rant, a manifesto, a treasury of evocative new terms (sissyphobia, autogynephyllia, phall-o-meter) and an account of the author’s transformation “from an activist going after establishment scientists into an aide-de-camp to scientists who found themselves the target of activists like me”--and back again... I suspect most readers will find that [Dreger’s] witnessing of these wild skirmishes provides a splendidly entertaining education in ethics, activism and science.”

Chicago Tribune
"Dreger tells the story in her new book on scientific controversies, Galileo's Middle Finger: Heretics, Activists, and the Search for Justice in Science, an engrossing volume that is sure to undo any lingering notions that academic debate is the province of empiricists who pledge allegiance to the truth, the whole truth, and nothing but the truth... Dreger's clear and well-paced prose makes for compelling—and depressing—reading. If you believe what you were taught about scientific method, about old ideas giving way under the sway of new evidence, you're an idealist and you probably know that already. The truth is sometimes closer to the much-repeated notion that a new idea can't truly take hold until the people who held the old idea die."

Salon.com:
"Galileo’s Middle Finger offers a trench-level account of several hot scientific controversies from the past 30 years, told with the page-turning verve of an exposé."

Forbes.com:
“Lying and deceit have been around for a long time—forever, probably—but what makes Dreger’s book so compelling is where she dug them up: among health activists, academics and ethicists who we normally associate with honesty and integrity…. Like her hero Galileo, Dreger believes that the ‘real’ truth does exist and we are all for the worse when we don’t seek it out. It is an argument that deserves more of our attention.”

Nature:
“Dreger ends this powerful book by call­ing for her fellow academics to counter the ‘stunningly lazy attitude toward pre­cision and accuracy in many branches of academia.’ In her view, chasing grants and churning out papers now take the place of quality and truth. It is a situation exacerbated by a media that can struggle when covering scientific controversies, and by strong pres­sures from activists with a stake in what the evidence might say. She argues, ‘If you must criticize scholars whose work challenges yours, do so on the evidence, not by poisoning the land on which we all live.’ There is a lot of poison in science these days. Dreger is right to demand better.”

Library Journal (starred review):
“Accomplishing deft journalistic storytelling, [Dreger] pursues relentlessly her thesis that neither truth nor justice can exist without the other and that empirical research is essential to democratic society. She challenges readers to recognize that the loudest voice is not necessarily right, the predominant view is not always correct, and the importance of fact-checking and defending true scholarship. A crusader in the mold of muckrakers from a century ago, Dreger doesn’t try to hide her politics or her agenda. Instead she advocates for change intelligently and passionately.”

Kirkus (starred review):
“Let us be grateful that there are writers like Dreger who have the wits and the guts to fight for truth.”

Dan Savage, founder of “It Gets Better” Project; author of American Savage:
“If there ever there were a book that showed how democracy requires smart activism and solid data—and how that kind of work can be defeated by moneyed interests, conservative agendas, inept governments, and duplicitous “activists”—this is it. Galileo’s Middle Finger reads like a thriller. The cliché applies: I literally couldn’t put it down. Alice Dreger leaves you wondering what’s going to happen to America if our universities continue to turn into corporate brands afraid of daring research and unpopular ideas about who we are.”

Edward O. Wilson, University Research Professor, Emeritus, Harvard University:
“In this important work, Dreger reveals the shocking extent to which some disciplines have been infested by mountebanks, poseurs, and even worse, political activists who put ideology ahead of science.”

Elizabeth Loftus, Distinguished Professor, University of California, Irvine:
“Galileo’s Middle Finger is a brilliant exposé of people that want to kill scientific messengers who challenge cherished beliefs. Dreger’s stunning research into the conflicts between activists and scholars, and her revelations about the consequences for their lives (including hers), is deeply profound and downright captivating. I couldn’t put this book down!”

Steven Pinker, Johnstone Professor of Psychology, Harvard University; author of The Blank Slate and How the Mind Works:
“In activism as in war, truth is the first casualty. Alice Dreger, herself a truthful activist, exposes some of shameful campaigns of defamation and harassment that have been directed against scientists whose ideas have offended the sensibilities of politicized interest groups. But this book is more than an exposé. Though Dreger is passionate about ideas and principle, she writes with a light and witty touch, and she is a gifted explainer and storyteller.”

Jared Diamond, author of Guns, Germs, and Steel and The World until Yesterday:
“Alice Dreger would win a prize for this year’s most gripping novel, except for one thing: her stories are true, and this isn’t a novel.  Instead, it’s an exciting account of complicated good guys and bad guys, and the pursuit of justice.”

Human Nature
“Galileo’s Middle Finger is not, ultimately, about scientists versus activists, but about the necessity of anyone interested in social justice primarily being concerned with truth. For a ‘sustainable justice,’ Dreger argues, ‘is impossible if we don’t know what’s true about the world.’ Liberal science, with its insistence on evidence and explicit rejection of arguments from personal authority, is the best system yet designed for distinguishing truth from falsehood. And for this reason, Dreger reminds us, ‘Evidence is an ethical issue.’”