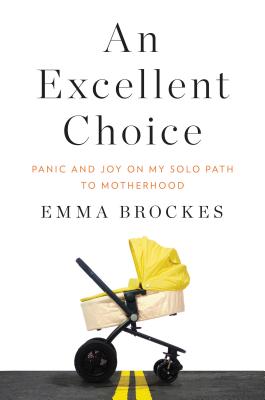 Panic and Joy on My Solo Path to Motherhood

From the author of She Left Me The Gun, an explosive and hilarious memoir about the exceptional and life-changing decision to conceive a child on one's own via assisted reproduction

When British journalist, memoirist, and New York-transplant Emma Brockes decides to become pregnant, she quickly realizes that, being single, 37, and in the early stages of a same-sex relationship, she's going to have to be untraditional about it. From the moment she decides to stop "futzing" around, have her eggs counted, and "get cracking"; through multiple trials of IUI, which she is intrigued to learn can be purchased in bulk packages, just like Costco; to the births of her twins, which her girlfriend gamely documents with her iPhone and selfie-stick, Brockes is never any less than bluntly and bracingly honest about her extraordinary journey to motherhood.

She quizzes her friends on the pros and cons of personally knowing one's sperm donor, grapples with esoteric medical jargon and the existential brain-melt of flipping through donor catalogues and conjures with the politics of her Libertarian OB/GYN—all the while exploring the cultural circumstances and choices that have brought her to this point. Brockes writes with charming self-effacing humor about being a British woman undergoing fertility treatment in the US, poking fun at the starkly different attitude of Americans. Anxious that biological children might not be possible, she wonders, should she resent society for how it regards and treats women who try and fail to have children?

Brockes deftly uses her own story to examine how and why an increasing number of women are using fertility treatments in order to become parents—and are doing it solo. Bringing the reader every step of the way with mordant wit and remarkable candor, Brockes shares the frustrations, embarrassments, surprises, and, finally, joys of her momentous and excellent choice.

Emma Brockes is the author of She Left Me the Gun: My Mother's Life Before Me. She writes for The Guardian's Weekend magazine and has contributed to The New York Times, The New Yorker, The Economist and Vogue. She is the winner of two British Press Awards—Young Journalist of the Year and Feature Writer of the Year—and while at Oxford won the Philip Geddes Memorial Prize for Journalism. She lives in New York.

Praise For An Excellent Choice: Panic and Joy on My Solo Path to Motherhood…

“[A] splendid and fascinating book. [Brockes’s] memoir is subtitled ‘Panic and Joy on My Solo Path to Motherhood,’ but I saw no time when Brockes — supremely confident, sensible and twice as smart as anyone else in the room — panicked. She is cool, methodical and, at times, insanely funny, with a great eye for the ironies and amusements of life…There is no doubt that her decision — at least for us readers — was an excellent one indeed.” —Minneapolis Star Tribune

“The book speaks to a growing contingent of would-be parents who reach their 30s and 40s and find they have the means and motivation to have kids outside of a conventional domestic partnership, embracing their chosen single parenthood as a form of empowerment. It seems as if almost everyone bearing a child is writing a book about it, but Brockes is too original a personality to fall in quietly with the rest. A disarming and casually hilarious take on the opposite of co-parenting.” —Kirkus

“Brockes’ second memoir will have readers caught up in the excitement and anxiety of pregnancy along with her. Her humor and empathy shine through, even during her most challenging moments. Whether parents, aspiring parents, or happily child-free, readers will enjoy Brockes’ intimate story of how she became a mother.” —Booklist

“[A] thoughtful memoir…Brockes takes readers on a fascinating and sometimes frustrating journey through fertility treatments, dashed hopes and delays, often accenting her tale with clever comparisons of the American and the British health care systems…An uplifting, well-told story, in which Brockes walks the fine line between surrendering to chance (i.e., not one but two babies) and taking charge to make tough but excellent choices.”  —Publishers Weekly

“I don't know whether to love Emma Brockes more as a writer or a human being. Why can't we all face life with her courage, grace, and shockingly good sense of humor?”
—Lauren Collins, author of When in French

“Emma Brockes is a spiky, smart and ferocious writer. Her quest to become a mother is alternately harrowing and hilarious.”
—Pamela Druckerman, author of Bringing Up Bébé and There Are No Grown-ups

“Witty, irreverent, and wickedly perceptive, An Excellent Choice illuminates not one, but a whole host of still quasi-taboo topics from sperm donors to assisted reproduction. Emma Brockes is a beautiful writer, a wonderful story-teller, and a keen observer of human nature.”
—Amy Chua, author of Battle Hymn of the Tiger Mother and Political Tribes
or
Buy Here
Copyright © 2020 American Booksellers Association