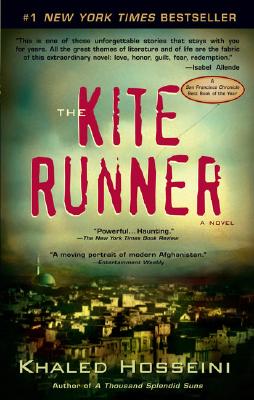 The New York Times bestseller and international classic loved by millions of readers.

The unforgettable, heartbreaking story of the unlikely friendship between a wealthy boy and the son of his father's servant, The Kite Runner is a beautifully crafted novel set in a country that is in the process of being destroyed. It is about the power of reading, the price of betrayal, and the possibility of redemption; and an exploration of the power of fathers over sons—their love, their sacrifices, their lies.

A sweeping story of family, love, and friendship told against the devastating backdrop of the history of Afghanistan over the last thirty years, The Kite Runner is an unusual and powerful novel that has become a beloved, one-of-a-kind classic.

"This powerful first novel...tells the story of fierce cruelty and fierce yet redeeming love. Both transform the life of Amir, Khaled Hosseini's privileged young narrator, who comes of age during the last peaceful days of the monarchy, just before his country's revolution and its invasion by Russian forces. But political events, even as dramatic as the ones that are presented in The Kite Runner, are only a part of this story. In The Kite Runner, Khaled Hosseini gives us a vivid and engaging story that reminds us how long his people have been struggling to triumph over the forces of violence—forces that continue to threaten them even today."—The New York Times Book Review—The New York Times Book Review

Khaled Hosseini was born in Kabul, Afghanistan, and moved to the United States in 1980. He is the author of the" New York Times "bestsellers "The Kite Runner," "A Thousand Splendid Suns," and "And the Mountains Echoed." He is A U.S. Goodwill Envoy to the United Nations Refugee Agency, and the founder of The Khaled Hosseini Foundation, a nonprofit that provides humanitarian assistance to the people of Afghanistan.