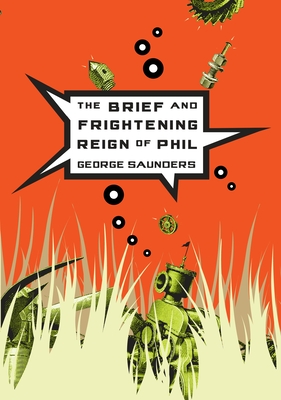 The Brief and Frightening Reign of Phil

From the #1 New York Times bestselling author of the Man Booker Prize-winning novel Lincoln in the Bardo and the story collection Tenth of December, a 2013 National Book Award Finalist for Fiction.

Welcome to Inner Horner, a nation so small it can only accommodate one citizen at a time. The other six citizens must wait their turns in the Short-Term Residency Zone of the surrounding country of Outer Horner. It's a long-standing arrangement between the fantastical, not-exactly-human citizens of the two countries. But when Inner Horner suddenly shrinks, forcing three-quarters of the citizen then in residence over the border into Outer Horner territory, the Outer Hornerites declare an Invasion In Progress—having fallen under the spell of the power-hungry and demagogic Phil.

So begins The Brief and Frightening Reign of Phil.  An Animal Farm for the 21st century, this is an incendiary political satire of unprecedented imagination, spiky humor, and cautionary appreciation for the hysteric in everyone.


Praise For The Brief and Frightening Reign of Phil…

"An astoundingly tuned voice—graceful, dark, authentic, and funny—telling just the kinds of stories we need to get us through these times."—Thomas Pynchon

"Mr. Saunders writes like the illegitimate offspring of Nathanael West and Kurt Vonnegut. His satiric vision of America is dark and demented; it is also ferocious and very funny."—Michiko Kakutani, The New York Times

"A master of distilling the disorders of our time into fiction."—Salon.com

George Saunders is the Man Booker Prize-winning author of Lincoln in the Bardo; Tenth of December; In Persuasion Nation; The Brief and Frightening Reign of Phil; Pastoralia; CivilWarLand in Bad Decline; The Braindead Megaphone; and a children's book, The Very Persistent Gappers of Frip. His work appears regularly in the New Yorker, Harper's and GQ. In 2006, he was awarded a MacArthur Foundation "genius grant." In 2000, The New Yorker named him one of the "Best Writers Under 40."  He is a 2013 National Book Award Finalist for Fiction. He teaches at Syracuse University.
Loading...
or support indie stores by buying on
(This book is on backorder)