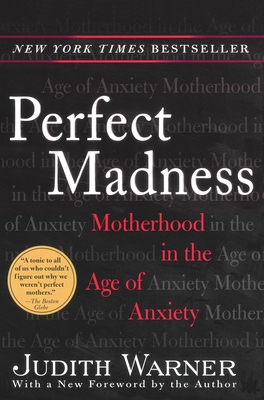 Motherhood in the Age of Anxiety

A lively and provocative look at the modern culture of motherhood and at the social, economic, and political forces that shaped current ideas about parenting

What is wrong with this picture? That's the question Judith Warner asks in this national bestseller after taking a good, hard look at the world of modern parenting--at anxious women at work and at home and in bed with unhappy husbands.

When Warner had her first child, she was living in Paris, where parents routinely left their children home, with state-subsidized nannies, to join friends in the evening for dinner or to go on dates with their husbands. When she returned to the States, she was stunned by the cultural differences she found toward how people think about effective parenting--in particular, assumptions about motherhood. None of the mothers she met seemed happy; instead, they worried about the possibility of not having the perfect child, panicking as each developmental benchmark approached.

Combining close readings of mainstream magazines, TV shows, and pop culture with a thorough command of dominant ideas in recent psychological, social, and economic theory, Perfect Madness addresses our cultural assumptions, and examines the forces that have shaped them.

Working in the tradition of classics like Betty Friedan's The Feminine Mystique and Christopher Lasch's The Culture of Narcissism, and with an awareness of a readership that turned recent hits like The Bitch in the House and Allison Pearson's I Don't Know How She Does It into bestsellers, Warner offers a context in which to understand parenting culture and the way we live, as well as ways of imagining alternatives--actual concrete changes--that might better our lives.

Praise For Perfect Madness: Motherhood in the Age of Anxiety…

"Manifestoes blast their way into the popular consciousness on two kinds of fuel: recognition (we see ourselves in them) and rage (we can no longer tolerate the injustice they describe). Judith Warner's 'Perfect Madness' brims with both." —The New York Times Book Review

"How did we become a nation of worry-wart, control-freak mothers? Warner does a superb job of succinctly tracing the societal evolution and parenting theories from the postwar, Dr. Spock '50s and '60s through the past three decades since the dawn of feminism...[Perfect Madness] is sure to stir controversy and emotions." —San Francisco Chronicle

"Perfect Madness has struck a chord among middle-class moms guilt-tripped into being time-martyrs and trying to micromanage their children’s lives." —People

"[Perfect Madness] has struck a chord with moms across the country, who believe they're going crazy." —Dallas Morning News

"In the end [Warner] arrives at the controversial conclusion that mothers are not victims of outside forces but rather their own worst enemies. The bigger issue, Ms. Warner argues, is that whether working or not, moms are consumed by what she sees as a new 'soul-draining' perfectionism that's turned parenting—from the first ultrasound to the last college application—into a competitive sport. Ms. Warner's observations inject new life into what has become a long, tired debate." —New York Observer

"In this polemic about contemporary motherhood, Warner argues that the gains of feminism are no match for the frenzied perfectionism of American parenting. In the absence of any meaningful health, child-care, or educational provisions, martyrdom appears to be the only feasible model for successful maternity—with destructive consequences for both mothers and children. Comparing this situation with her experiences of child-rearing in France, Warner finds American 'hyper-parenting'—pre-school violin and Ritalin on demand—'just plain crazy.' The trouble is a culture that, though it places enormous private value on children, neglects them in the arenas of public policy. She is concerned less with sexual politics than with the more persuasive effects of the 'winner take all' mentality, and makes an urgent case for more socially integrated parenthood." —New Yorker

"[Perfect Madness] has struck a chord among middle-class moms guilt-tripped into being time-martyrs and trying to micromanage their children's lives." —People

"Warner argues for a saner society, where everyone would have access to a decent living and enough family time for themselves and their children." —Publishers Weekly

"Warner has…inspired the beginnings of debate about where neurotic motherhood leads." —London Observer

"Perfect Madness is the utter madness of life in a frenzy around the children. But it also hints at the madness that is inherent in women's attempts to be 'perfect mothers' and have 'perfect' children. As a result they give up everything that distinguished them as individual women—with a variety of wishes, desires, and interests—before they became mothers." —Ha'Aretz

Judith Warner is the author of the New York Times bestselling Perfect Madness: Motherhood in the Age of Anxiety and Hillary Clinton: The Inside Story, as well as several other books. She writes the Domestic Disturbances column for the New York Times website and is a former special correspondent for Newsweek in Paris. She lives in Washington, D.C., with her husband and their children.
Loading...
or
Not Currently Available for Direct Purchase