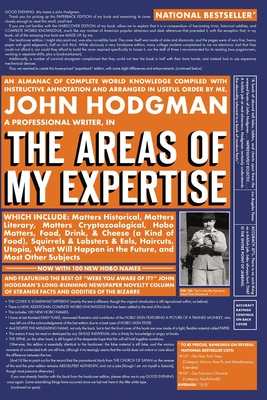 The Areas of My Expertise is a lavish compendium of handy reference tables, fascinating trivia, and sage wisdom—all of it completely unresearched, completely undocumented and (presumably) completely untrue, fabricated by the illuminating, prodigious imagination of John Hodgman, certifiable genius. In an age when fake facts are all the rage, John Hodgman proves he is a man ahead of his time.

Look out for John Hodgman's latest book, Vacationland, available from Viking in Fall 2017.

Praise For The Areas of My Expertise: An Almanac of Complete World Knowledge Compiled with Instructive Annotation and Arranged in Useful Order…

"If Borges and Ben Franklin got drunk and decided to write a book together, the result might have been something a lot like this freaky 'almanac'."
—Tom Perrotta

"Even if you buy this book for the 700 hobo names alone, you will have gotten more than your money's worth."
—Dave Eggers

"A book of absurd tall tales, tables and charts spun from the warped brain of John Hodgman . . . Impressively eclectic."
—The Los Angeles Times

John Hodgman is a writer, comedian, and actor. He is the author of three New York Times bestselling books—The Areas of My Expertise, More Information Than You Require, and That Is All. After an appearance to promote his books on The Daily Show, he was invited to return as a contributor, serving as the show’s "Resident Expert" and "Deranged Millionaire." This led to an unexpected and, frankly, implausible career before the camera. He has performed comedy for the president of the United States, at a TED conference, and in a crypt in Green-Wood Cemetery in Brooklyn, New York. Finally, he is the host of the popular Judge John Hodgman podcast, in which he settles serious disputes between real people, such as "Is a hot dog a sandwich?" and "Should we tell our children the TRUTH about Santa Claus?" He also contributes a weekly column under the same name for The New York Times Magazine. He is currently working on a memoir, Vacationland, which will be published in October 2017.
Loading...
or
Not Currently Available for Direct Purchase