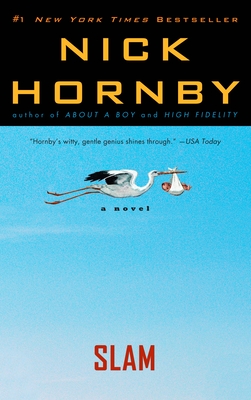 The #1 New York Times bestseller from the beloved, award-winning author of Funny Girl, High Fidelity, and About A Boy.

For 16-year-old Sam, life is about to get extremely complicated. He and his girlfriend—make that ex-girlfriend— Alicia have gotten themselves into a bit of trouble. Sam is suddenly forced to grow up and struggle with the familiar fears and inclinations that haunt us all.

Nick Hornby’s poignant and witty novel shows a rare and impressive understanding of human relationships and what it really means to be a man.

“With Sam, Hornby has given us another of his perfectly imperfect male characters… Sparkling.” —Chicago Sun-Times

“We want to hear whatever this kid has got to say—the whole scary, hilarious story.… Hornby just makes it look easy.” —The Washington Post

Nick Hornby is the author of six internationally bestselling novels (High Fidelity, About a Boy, How to be Good, A Long Way Down, Slam and Juliet, Naked) and several works of  non-fiction including Fever Pitch, Songbook and Ten Years In The Tub, a collection of his 'Stuff I've Been Reading' columns from the Believer.  His screenplay for the film An Education was nominated for an Academy Award. He lives in Highbury, north London.
Loading...
or
Not Currently Available for Direct Purchase