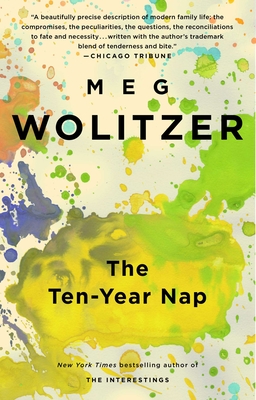 The New York Times bestselling novel by the author of The Interestings and The Female Persuasion that woke up critics, book clubs, and women everywhere.

For a group of four New York friends the past decade has been defined largely by marriage and motherhood, but it wasn’t always that way. Growing up, they had been told that their generation would be different. And for a while this was true. They went to good colleges and began high-powered careers. But after marriage and babies, for a variety of reasons, they decided to stay home, temporarily, to raise their children. Now, ten years later, they are still at home, unsure how they came to inhabit lives so different from the ones they expected—until a new series of events begins to change the landscape of their lives yet again, in ways they couldn’t have predicted.

Written in Meg Wolitzer’s inimitable, glittering style, The Ten-Year Nap is wickedly observant, knowing, provocative, surprising, and always entertaining, as it explores the lives of its women with candor, wit, and generosity.

Praise For The Ten-Year Nap…

"Wolitzer is as precise and rigorous an observer of social status as Tom Wolfe; she is as invisibe and pitiless and clear-eyed a chronicler of female-male tandems as Philip Roth or John Updike." --Chicago Tribune

"Very entertaining. The tartly funny Wolitzer is a miniaturist who can nail a contemporary type, scene, or artifact with deadeye accuracy." --The New York Times

"Wolitzer perfectly captures her women's resolve in the face of a dizzying array of conflicting loyalties. To whom does a woman owe her primary allegiance? Her children? Her mother? Her friends, spouse, community? God forbid, herself?" --The Washington Post

"What determines a woman's worth?... Wolitzer's middle-aged moms are flawed: selfish, neurotic, and occasionally petty. But they-- and their conflicts-- feels vividly, satisfyingly real." --Entertainment Weekly

"Wolitzer's great ear for dialogues and for insinuating humor into seriousness make this noel a though-provoking pleasure to read." --The Seattle Times

Meg Wolitzer is the New York Times bestselling author of The Interestings, The Uncoupling, The Ten-Year Nap, The Position, The Wife, and Sleepwalking. She is also the author of the young adult novel, Belzhar. Wolitzer lives in New York City.
Loading...
or
Not Currently Available for Direct Purchase