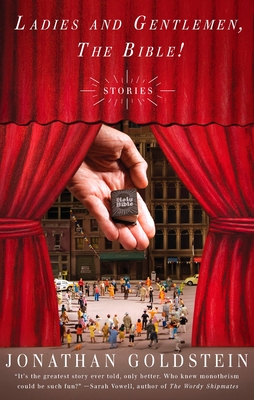 Ladies and Gentlemen, the Bible!

A hilarious re-imagining of the heroes of the Old Testament for a modern world-and the neurotic, demanding reader.

In the beginning...there was humor.

Sure, it's the foundation for much of Western morality and the cornerstone of world literature. But let's face it: the Bible always needed punching up. Plus, it raised quite a few questions that a modern world refuses to ignore any longer: wouldn't it be boring to live inside a whale? How did Joseph explain Mary's pregnancy to the guys at work? Who exactly was the megalomaniacal foreman who oversaw the construction of the Tower of Babel? And honestly, what was Cain's problem?

In Ladies and Gentlemen, the Bible!, Jonathan Goldstein re-imagines and recasts the greatest heroes of the Bible with depth, wit, and snappy dialogue. This is the Bible populated by angry loners, hypochondriacs, and reluctant prophets who fear for their sanity, for readers of Sarah Vowell and the books of David Sedaris. Basically, a Bible that readers can finally, genuinely relate to.

Jonathan Goldstein's new book, I'll Seize the Day Tomorrow, will be available May 2013.

Praise For Ladies and Gentlemen, the Bible!…

"It's the Greatest Story Ever Told, only better. Who knew monotheism could be such fun?" — Sarah Vowell, New York Times bestselling author of The Wordy Shipmates

"Jonathan Goldstein is one of the funniest and most original writers I can think of. Anything by him is better than anything by just about anyone else." — David Sedaris, #1 New York Times bestselling author of When You Are Engulfed in Flames

“Jonathan Goldstein has one of the most unique and compelling comic voices around.” — Sheila Heti, author of How Should a Person Be?

“Jonathan Goldstein’s existential misery makes for good reading. As long as he keeps writing such funny and original pieces about it, I hope he continues to suffer.”
—Shalom Auslander, author of Foreskin’s Lament and Hope: A Tragedy

Jonathan Goldstein is the award-winning author of I'll Seize the Day Tomorrow and Lenny Bruce is Dead. His work has appeared in the New York Times Magazine, GQ, Ready-Made, and the New York Times. He's a contributing editor to NPR's This American Life, where his work is regularly featured. He lives in Montreal.
Loading...
or support indie stores by buying on
(This book is on backorder)