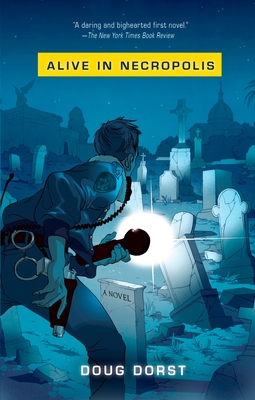 A "dark and funny debut"(Seattle-Times) about a young police officer struggling to maintain a sense of reality in a town where the dead outnumber the living.

Colma, California, the "cemetery city" serving San Francisco, is the resting place of the likes of Joe DiMaggio, Wyatt Earp, and William Randolph Hearst. It is also the home of Michael Mercer, a by-the-book rookie cop struggling to settle comfortably into adult life. Instead, he becomes obsessed with the mysterious fate of his predecessor, Sergeant Wes Featherstone, who spent his last years policing the dead as well as the living. As Mercer attempts to navigate the drama of his own daily life, his own grip on reality starts to slip-either that, or Colma's more famous residents are not resting in peace as they should be.

Praise For Alive in Necropolis…

"In the same way Buffy the Vampire Slayer mixed high school and bloodsuckers, Doug Dorst combines cops and ghosts in his Alive in Necropolis. The result is a haunted variation on Ed McBain's 87th Precinct series...Imaginative and accomplished... Pitch-perfect."
-USA Today

Doug Dorst is the author of three books, most recently the novel S, which he co-authored with J. J. Abrams. He is the author of the novel Alive in Necropolis, which was honored as San Francisco’s 2009 One City One Book selection and as a runner-up for the 2009 PEN/Hemingway, Shirley Jackson, and IAFA/Crawford Awards, and a short story collection, The Surf Guru. His stories have appeared in McSweeney’s, Ploughshares, ZYZZYVA, and other journals. A graduate of the Iowa Writers’ Workshop and a three-time Jeopardy! champion, Dorst lives in Austin and teaches writing at Texas State University in San Marcos.
Loading...
or
Not Currently Available for Direct Purchase