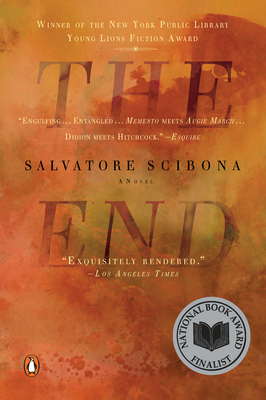 An incredible debut and National Book Award-nominated novel, described as "Memento meets Augie March. Didion meets Hitchcock" by Esquire, from the author of The Volunteer

It is August 15, 1953, the day of a boisterous and unwieldy street carnival in Elephant Park, an Italian immigrant enclave in northern Ohio. As the festivities reach a riotous pitch and billow into the streets, five members of the community labor under the weight of a terrible secret. As these floundering souls collide, one day of calamity and consequence sheds light on a half century of their struggles, their follies, and their pride. And slowly, it becomes clear that buried deep in the hearts of these five exquisitely drawn characters is the long-silenced truth about the crime that twisted each of their worlds.

Cast against the racial, spiritual, and moral tension that has given rise to modern America, this first novel exhumes the secrets lurking in the darkened crevices of the soul of our country. Inventive, explosive, and revelatory, The End introduces Salvatore Scibona as an important new voice in American fiction.

Praise For The End: A Novel…

"A masterful novel set amid racial upheaval in 1950s America during the flight of second-generation immigrants from their once-necessary ghettos. Full of wisdom, consequence, and grace, Salvatore Scibona's radiant debut brims with the promise of a remarkable literary career, of which The End is only the beginning." – Annie Dillard

"Exquisitely rendered... Does not open up so much as catch and slowly reel in." – Los Angeles Times

"Rhapsodic... Unflinching... Masterful... A novel unafraid to split into the breastplate of humankind and aim a floodlight at the demons dancing there." – Southern Review

"Precise yet inventive...[Scibona] fleshes out a scrabbling immigrant Cleveland." – The American Book Review

"Like no other contemporary writer...A concordance of the immigrant experience from the beautiful to the brutal and everything in between." – ZZ Packer, author of Drinking Coffee Elsewhere

"Possibly the only novel I've ever read that legitimately deserves to be called Bellovian. And that's no small claim." – Kenyon Review

"Scibona loves language and recognizes the power of using the right word. He seems better educated than most American writers, with a strong vocabulary and rich ideas that urge him to build complex sentences.... To the reader's enrichment, The End is an outstanding work in all the right ways" – Annie Proulx, The Guardian

“Virtuosic… There is an intensity of purpose to Salvatore Scibona's endeavor that is decidedly uncommon…  Scibona is a deft and intricate plotter… There is no doubt whatsoever of the beauty or brilliance of Scibona's writing…  The free flow of thought is almost miraculously caught.” – Olivia Laing, The Observer

"It may have taken a while for Scibona to get to this side of the Atlantic, but The End suggests this is the beginning of a fascinating career from an important new American voice." – Stuart Evers, Daily Telegraph (UK)

"This is an extraordinary novel about the experience of immigration; unsentimental and beautifully written." — Kate Saunders, The Times (UK)

"Its moments of sharply realized emotional pull and gentle beauty reel you in." — Metro (UK)

Salvatore Scibona's first novel, The End, was a finalist for the National Book Award and winner of the Young Lions Fiction Award. His work has won a Guggenheim Fellowship, a Pushcart Prize, an O. Henry Award, and a Whiting Award; and The New Yorker named him one of its "20 Under 40" fiction writers to watch. He directs the Cullman Center for Scholars and Writers at the New York Public Library.

Although the novel follows the lives of five unique characters, why do you think we meet Rocco LaGrassa first among them? Is he more sympathetic than the others? How does his situation—abandoned by his family and on a quest to find them—resonate with the greater themes of the book?

When Rocco is at Niagara Falls, he is certain that he and the ice cream man share a moment of mutual recognition, although the latter denies it. Why is the moment so bright in Rocco’s memory? What do you think this scene illumines about the role of memory in the rest of the book?

Mrs. Marini describes her breasts as “withered medlars … unique among fruits in that it is inedible until it starts to rot” (p. 69). It is a description that could be applied to Mrs. Marini herself. What do you think Mrs. Marini is trying to say about herself? Could anyone else in the novel be similarly described?

Before he goes out and follows Lina, the jeweler recollects being chastised by his mother. “She said, ‘You’re bored because you don’t know the names of things’ ” (p. 123). What was she trying to tell him? Knowing what the jeweler has done, what do you think this means in the context of his crime?

Why does Patrizia stay on at the grape farm after Umberto abandons it to return to Italy? What do you think Francesco means when he calls Ashtabula County’s soil “too good … to grow respectable wine grapes” (p. 173)? How might this sentiment also apply to the neighborhood of Elephant Park?

“He felt shame and didn’t know what it was coming from, what purpose it was serving. He had to examine it. It was a warning of some kind. It was his heart warning his will of something” (p. 206). In what way is Ciccio’s shame intertwined with his sense that “he had become a grown man” (p. 206)? Do you think this sense of shame can be linked to something else in Ciccio’s life? In Lina’s?

Assimilated and successful, Gary—a second-generation Italian-American, who opens Part Four of the novel—is the realization of every immigrant parent’s aspirations for their children. How does his experience of the festival epitomize the paradox of the American dream? How is his experience in America different from Rocco’s? Ciccio’s?

Despite the circumstances of her departure, Lina comes back to Elephant Park. Why do you think she came back, even when the place haunts her? Was it only for Ciccio?

Asked by one of the priests whether it’s better to feel or to think, Ciccio replies, “”That’s easy! … To feel” (p. 222). Later, Constanza laments, “I have never known, and do not know now, my own feelings; I can only feel them” (p. 292). Do you attribute their differing opinions to age, gender, or something else? What do these assertions reveal about each?

The day of the carnival is saturated with an underlying sense of racial menace yet no act of violence is actually committed against the African-American characters. What is the role of race in the novel? How else is it manifested in the story?

Women in The End mostly work in jobs that can be performed out of the home—Lina as a drapery seamstress and Mrs. Marini as an illegal abortionist—but they are often left exposed in public. How else are the female characters in control of their world? How are they at the mercy of their surroundings? How is it different now for working-class women than in 1953?

Mrs. Marini closes the novel in a reverie to her dead husband and it’s here where we see a bit of the deeper emotional fabric that she suppresses in most of her daily life. What do you think she means when she says, “My darling darling, you have killed the past. You have broken my heart. You have given me the present moment?” (p 314) And what do you think this statement reveals about the way the past and present are linked in the novel itself?

There is so much that the novel leaves tantalizingly unsaid. Why do you think Scibona leaves so much to be inferred by the reader? If it were possible, what unknown would you most like to have resolved?

The End is a powerful work of fiction about an American immigrant community. What character do you identify with the most and why? What other novels did it remind you of? Why?