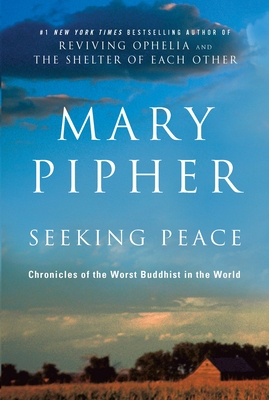 Chronicles of the Worst Buddhist in the World

“Subtitled Chronicles of the Worst Buddhist in the World, this enjoyable book is a cross between a memoir and a spiritual journey. Best known for her insightful studies of adolescent girls (Reviving Ophelia) and of aging (Another Country), Pipher turns her discerning eye from the outer world to the inner. Using her own life experiences as a vehicle, she carries the reader into, around and through the spiritual labyrinth in which we all find ourselves. Pipher's insights and experiences will strike a resonating chord with many readers, and may help others in their own quest of seeking peace.”
— Sherry Stegner, Snowbound Books, Marquette, MI
View the List

Like most lives, Mary Pipher’s is filled with glory and tragedy, chaos and clarity, love and abandonment. She spent her childhood in small Midwestern towns, the nurturing daughter of a doctor mother and a restless, jack-of-all-trades father. Later, as a wife, mother, and therapist, she was able to do what she most enjoyed: learn about the world and help others. But after the surprising success of Reviving Ophelia, she found herself overwhelmed by the demands on her time and attention. In 2002, Pipher experienced a meltdown. She realized that success and fame were harming her, and she began the long journey to a quieter, more meditative life that would carry her toward self-acceptance and joy.

In Seeking Peace, Pipher tells her own remarkable story, and in the process reveals fundamental truths about our individual search for happiness and love. Candid, surprising and moving, Seeking Peace offers a map for our own journey toward a more fulfilling, more joyously lived life.

Praise For Seeking Peace: Chronicles of the Worst Buddhist in the World…

“A generous book conceived and executed by a compassionate…mind.”
—Publishers Weekly (starred review)

“An absorbing chronicle of discovery.”
—Booklist

“This is an insightful and terribly personal memoir of an active and successful life, and of how [Pipher’s] almost desperate need for inner peace amid the noise of her world has dominated so many of her days.”
—Lincoln Journal Star

Mary Pipher, Ph.D., is a psychologist and the author of nine books, including the New York Times bestsellers Reviving Ophelia, The Shelter of Each Other, and Another Country, as well as Seeking Peace and Writing to Change the World. She lives in Nebraska.
Loading...
or
Not Currently Available for Direct Purchase