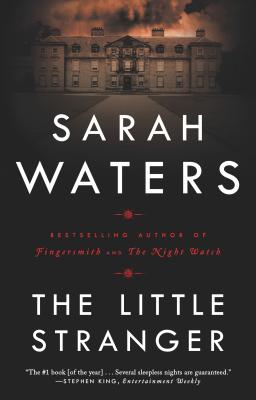 Soon to be a major motion picture, directed by Lenny Abrahamson and starring Domhnall Gleeson and Ruth Wilson.

One postwar summer in his home of rural Warwickshire, Dr. Faraday, the son of a maid who has built a life of quiet respectability as a country physician, is called to a patient at lonely Hundreds Hall. Home to the Ayres family for over two centuries, the Georgian house, once impressive and handsome, is now in decline, its masonry crumbling, its gardens choked with weeds, the clock in its stable yard permanently fixed at twenty to nine. Its owners—mother, son, and daughter—are struggling to keep pace with a changing society, as well as with conflicts of their own. But are the Ayreses haunted by something more sinister than a dying way of life? Little does Dr. Faraday know how closely, and how terrifyingly, their story is about to become intimately entwined with his.

Praise For The Little Stranger…

“Wonderfully evoked…Waters has rendered the old house magnificently in its fading glory, and its in habitants sparkle like chandeliers in the damp, peeling rooms…Sarah Waters is an excellent, evocative writer, and this is an incredibly gripping and readable novel.”
—The New York Times Book Review  (Editor’s Choice)

“Haunted by the spirits of Henry James and Edgar Allan Poe…Waters is just one turn of the screw away from ‘The Fall of the House of Usher.’ She keeps the lightening flashing in every gloomy chapter, and you can’t help but gasp, ‘It’s alive!’”
—The Washington Post

“Completely absorbing…I wanted to linger in that fictional world, page by page, chapter by chapter.”
—Newsday

“A virtuoso writer…If you want a ghost story that creeps up your spine, The Little Stranger delivers.”
—The Seattle Times

“Waters has managed to write a near-perfect gothic novel while at the same time confidently deploying the form into fresher territory. It’s an astonishing performance, right down to the book’s mournful and devastating final sentence.”
—Laura Miller, Salon.com

“A marvelous and truly spooky historical novel.”
—The Boston Globe

“Rich with historic detail and slow, deliberate building toward the revelation of its secrets, [The Little Stranger] delights even as it leaves you unnerved.”
—The Miami Herald

“Like the gloomy English weather, an air of impending doom lingers over every chapter of The Little Stranger…an up-all-night page-turner that provides a cogent dose of social commentary.”
—The Cleveland Plain Dealer

“In The Little Stranger, Hundreds Hall serves as a perfect symbol of the postwar erosion of Britain’s class hierarchies, but it also, increasingly, transforms into a scheming, deadly character…Waters, a master at stoking anticipation, withholds the truth about her ghost until the final pages. By then we already strongly suspect its identity, but the confirmation is subtle, surprising, and deeply, deeply chilling.”
—NPR.org

“A stunning haunted house tale whose ghosts are as horrifying as any in Shirley Jackson’s The Haunting of Hill House.”
—Publishers Weekly (starred review)

“Few authors do dread as well as Waters. Her latest novel is a ghost story with elements of both ‘The Fall of the House of Usher’ and Brideshead Revisited. This spooky satisfying read has the added pleasure of effectively detailing postwar village life, with its rationing, social structures, and gossip, all on the edge of Britain’s massive change to a social state.”
—Library Journal

Sarah Waters is the New York Times–bestselling author of The Paying Guests, The Little Stranger,The Night Watch, Fingersmith, Affinity, and Tipping the Velvet. She has three times been short-listed for the Man Booker Prize, has twice been a finalist for the Orange Prize, and was named one of Granta’s best young British novelists, among other distinctions. Waters lives in London.