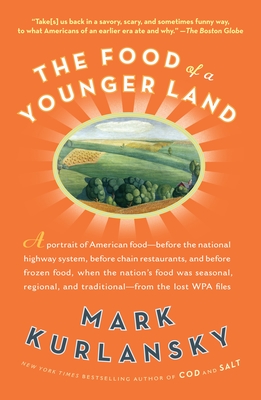 The Food of a Younger Land

A portrait of American food from the lost WPA files

Recommended by Chef José Andrés on The Drew Barrymore Show!

A portrait of American food--before the national highway system, before chain restaurants, and before frozen food, when the nation's food was seasonal, regional, and traditional--from the lost WPA files.

In the throes of the Great Depression, a make-work initiative for authors-called "America Eats"-was created by the WPA to chronicle the eating habits, traditions, and struggles of local Americans. Mark Kurlansky, author of Salt and Cod, unearths this forgotten literary treasure, chronicling a bygone era when Americans had never heard of fast food or grocery superstores. Kurlansky brings together the WPA contributions-featuring New York automats and Georgia Coca-Cola parties, Maine lobsters and Montana beaver tails-and brilliantly showcases them with authentic recipes, anecdotes, and photographs.

Mark Kurlansky is the New York Times bestselling author of many books, including The Food of a Younger Land, Cod: A Biography of the Fish That Changed the World; Salt: A World History; 1968: The Year That Rocked the World; and The Big Oyster: History on the Half Shell. He lives in New York City.
Loading...
or support indie stores by buying on