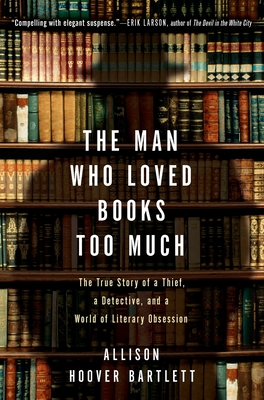 In the tradition of The Orchid Thief, a compelling narrative set within the strange and genteel world of rare-book collecting: the true story of an infamous book thief, his victims, and the man determined to catch him.

Rare-book theft is even more widespread than fine-art theft. Most thieves, of course, steal for profit. John Charles Gilkey steals purely for the love of books. In an attempt to understand him better, journalist Allison Hoover Bartlett plunged herself into the world of book lust and discovered just how dangerous it can be.

John Gilkey is an obsessed, unrepentant book thief who has stolen hundreds of thousands of dollars worth of rare books from book fairs, stores, and libraries around the country. Ken Sanders is the self-appointed "bibliodick" (book dealer with a penchant for detective work) driven to catch him. Bartlett befriended both outlandish characters and found herself caught in the middle of efforts to recover hidden treasure. With a mixture of suspense, insight, and humor, she has woven this entertaining cat-and-mouse chase into a narrative that not only reveals exactly how Gilkey pulled off his dirtiest crimes, where he stashed the loot, and how Sanders ultimately caught him but also explores the romance of books, the lure to collect them, and the temptation to steal them. Immersing the reader in a rich, wide world of literary obsession, Bartlett looks at the history of book passion, collection, and theft through the ages, to examine the craving that makes some people willing to stop at nothing to possess the books they love.

“In this great read about the collector’s obsession gone wrong, Ms. Bartlett gives us fascinating glimpses of the rare book world, the criminal mind and the limits of journalistic involvement. Anyone who has trouble passing a used bookstore without going in will love this book.”
—Lynn H. Nicholas, author of The Rape of Europa

“Hats off to Allison Bartlett for a splendid contribution to the literature of bibliophilia/bibliomania, the John Gilkey–Ken ‘bibliodick’ Sanders story is one that cried out to be told, and she has accomplished it with style and substance. Very nicely done.”
—Nicholas A. Basbanes, author of A Gentle Madness

“A fascinating journey into a strange, obsessive world where a love for books can sometimes become a fatal attraction.”
—Simon Worrall, author of The Poet and the Murderer

“John Gilkey wanted to own a rich-man’s library in the worst way, and was soon acquiring expensive first editions in the very worst way of all: theft. Allison Hoover Bartlett’s “The Man Who Loved Books Too Much” is the enthralling account of a gently mad con artist and his fraudulent credit-card scams, but it’s also a meditation on the urge to collect and a terrific introduction to the close-knit, swashbuckling world of antiquarian book dealers.”
—Michael Dirda, Pulitzer Prize–winning critic and author of Classics for Pleasure and the memoir An Open Book

“Allison Hoover Bartlett has written a meticulous and fascinating book about a serial bookthief and the persistent sleuth who dogged him for years and finally caught him. It will be especially gripping for those of us who trade in antiquarian books, who owe much to Ken Sanders’s persistence. A fine read.”
—Larry McMurtry, bestselling author of Books: A Memoir and the Pulitzer Prize–winning Lonesome Dove

“With its brilliantly observed details, wry humor, and thrilling plot twists, Bartlett’s narrative drew me deep into the obsessive world of a book thief and the dealer determined to stop him. It’s a captivating cat-and-mouse game and a fascinating exploration of why people are so passionate about books. If you liked The Orchid Thief, you’re going to love The Man Who Loved Books Too Much.”
—Julia Flynn Siler, author of The House of Mondavi

“Bartlett’s tale of literary intrigue makes you fall in love with books all over again. From her fascinating descriptions of prized manuscripts to her profile of a man who took an obsession too far, her story will leave you hankering to read more. ”
—Julia Scheeres, author of Jesus Land

“As a rule I approach unsolicited galleys with the same degree of delight that I reserve for root canals. This book surprised me. I read the first paragraph and was drawn in, not so much by the subject matter as by the author's cozy, quiet style, evocative of the work of Dava Sobel and Janet Malcolm. I found the narrative compelling, and I loved the inside stories about old books.”
—Erik Larson, bestselling author of The Devil and the White City

Allison Hoover Bartlett's writing has appeared in the New York Times, the Washington Post, the San Francisco Chronicle Magazine, and other publications. Her original article on John Gilkey was included in The Best American Crime Reporting 2007.

What are the subtleties of stealing for profit versus stealing out of a love for books themselves? Is one more justified than the other?

What motivates Bartlett’s quest to uncover the stories behind the high profile book thefts? How does this motivation change over the course of the book? Did you find yourself at times sympathizing with or feeling pity for Gilkey? Why or why not?

Why do people collect books? What makes certain titles more valuable? The author notes that our books are often “repositories for memories” (p. 20), so given that criteria, what might be your most “valuable” books, and why?

In an age of digital book formats do you think there is any steam left in modern book collecting? What effect might this shift to ebooks have? What might be in store for collectors in the future? What do you think our relationship to the “book” will be? Has a shift already begun?

Has learning some of the tricks of the book collecting trade—smelling books for signs of mildew encroachment, the flawed nature of “certificates of authenticity,” the joy of finding fore-edged paintings—altered or newly inspired your relationship to books? What insights from this story have had the most impact on you and your collection?

Why do some collectors (like Gilkey) risk it all—fortune, freedom, and reputation—to steal to add to their collections? What might prevent others, though equally obsessive, from acting in the same way?

From the lens of our culture, what does a library full of old and collectable books say about us (our identities)? Why might we be willing to buy into this projection? Why might we still cling to the idea of personal libraries equating to genteel status or wealth?

Why is Gilkey so eager to share his story, including his motivations and theft strategy, with Bartlett? Though it would only increase his profile and make it harder for him to remain anonymous as a thief, what does he stand to gain by telling all?

Within the story we get a glimpse into the relationships between Sanders and his father, and Gilkey and his father. Compare and contrast their early lives and the involvement of their fathers in Sanders’s and Gilkey’s collecting activities. What behaviors were cultivated and encouraged by each? Though both started young with their passions, what factors contributed to their divergent paths?

The author notes that the monetary value in literary classics has outpaced stock and bond markets for the past 20 years but notes Sanders’s opinion that “it wasn’t necessarily a good thing. Books should always be acquired for the sheer love and joy of it” (p. 117). Do you agree? What would be the dangers of rare books being treated like fine art commodities?

Why does Gilkey look at his fellow book collectors as his enemies rather than fellow connoisseurs or friends? Contrast his antagonistic, predatory relationship with them to the cordial, extended family-like treatment other collectors extend to each other at book fairs and other gatherings.

The Northern California bookselling community is a highly unique and close-knit group. Do you think another merchant group could be capable or willing to go to the lengths that they do to catch a serial thief? Why might they have felt so compelled to act, outside of the monetary loss? What is lost if they fail?

What ultimately drives Ken Sanders to take on the crusade to nail Gilkey? How would you answer the author who seeks to understand why Gilkey is “so passionate about books…he would put his freedom on the line for them” and why Sanders is “so determined to catch him…[he’d put] the financial stability of his store on the line for it”?

Do you think Bartlett had an ethical obligation to share the details Gilkey revealed to her with the authorities or other booksellers? Do you agree with her rationalization as she shifted “from an observer to participant in Gilkey’s story” (p. 241)?