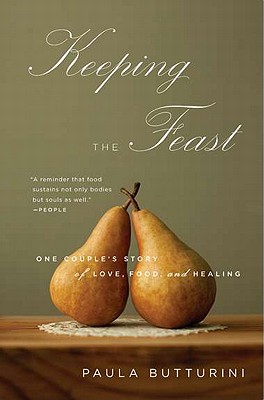 One Couple's Story of Love, Food, and Healing

A story of food and love, injury and healing, Keeping the Feast is the triumphant memoir of one couple overcoming depression through nourishment and restoration in Italy

Paula Butturini and John Tagliabue met in Italy, fell in love, and four years later, married in Rome. But less than a month after the wedding, tragedy struck. They had transferred from their Italian paradise to Warsaw and while reporting on an uprising in Romania, John was shot and nearly killed by sniper fire. Although he recovered from his physical wounds in less than a year, the process of healing had just begun. Unable to regain his equilibrium, her husband became depressed, sinking into a deep sadness that reverberated throughout their relationship. It was the abrupt end of what they'd known together, and the beginning of a new phase of life neither had planned for. All of a sudden, Paula was forced to reexamine her marriage, her husband, and herself.

Paula began to reconsider all of her previous assumptions about healing. She discovered that sometimes patience can be a vice, anger a virtue. That sometimes it is vital to make demands of the sick, that they show signs of getting better. And she rediscovered the importance of the most fundamental of human rituals: the daily sharing of food around the family table.

A universal story of hope and healing, Keeping the Feast is an account of one couple's triumph over tragedy and illness, and a celebration of the simple rituals of life, even during the worst life crises. Beautifully written and tremendously moving, Paula's story is a testament to the extraordinary sustaining powers of food and love, and to the stubborn belief that there is always an afterward, there is always hope.

Paula Butturini has worked in overseas bureaus in London, Madrid, Rome, and Warsaw for United Press International and The Chicago Tribune. She is now a writer based in Paris.

Paula and John associate Rome with comfort, food, beauty, friends, and abbondanza (abundance). Do you have a similar association with a particular city or place as being a center of healing or comfort?

Butturini talks of cravings or “voglie…those deep, impulsive hungers for some special seasonal feast” (10) and describes at length how much she looks forward to asparagus for many reasons—from the taste to the memories the vegetable invokes to the symbolism it embodies of the promise of spring. What sorts of foods are you deeply excited for when their season approaches? What dishes hold symbolic meaning for you?

Butturini prepares her first supper for her mother at age seven, and while her “Saucy Hamburger Crumble” wasn’t the best meal they’d eaten, she notes that “even a bad recipe has its uses” (132). What dishes have you prepared that made you proud? Which were disasters? What have you learned while cooking or baking? Do you cook strictly “by the book,” the style Butturini grew up following? Or do you improvise in the kitchen, as Butturini learned to do later in life?

Keeping the Feast is very much a portrait of a marriage. Discuss the ever-evolving dynamic between Paula and John, and the roles they play vis a vis one another. Butturini observes that very early in their marriage, “my idea of a helpful spouse was still naivete itself: patience, fortitude, endurance” (113), but later this vision grows to encompass far more; she states: “to be a comfort to one’s spouse, to be comforted by one’s spouse, to delight—and to growl—at one’s beloved, and to find joy in both the delighting and the growling: that is my idea of a sturdy, happy marriage” (149). Do you agree with her definition?

John responds to the news of Paula’s being beaten and badly hurt in Czechoslovakia with remorse; he tells her “It’s all my fault” (59) because he brought her to a dangerous area of the world. Butturini also notes, “in times of severe stress, John felt guilty, unlike me, who always got angry” (59). Discuss John and Paula’s divergent reactions to their own injuries and the injuries that befall their spouse. How does her anger ultimately serve her?

Discuss Butturini’s coping mechanisms in the months following John’s shooting, while she’s staying in Munich, and beyond—and the people, activities, and items that sustained her. How does she use her training as a journalist to cope? What significance do meals (purchasing, preparing, dining) take on during John’s intense depression?  How might you have reacted were you in her situation, and what might you have done to keep going?

Discuss Butturini’s relationship with her parents, and particularly with her mother. How does her mother’s history of clinical depression play into her reactions to John’s own battle with that illness?

A family therapist tells Butturini that her “unnatural patience” with John’s depression “was perhaps contributed to its length” (189). Were you in her situation, do you feel you would have been as patient?

What did you think of Butturini’s decision to have a child late in life, and John’s anxieties about becoming a father again?

Butturini felt “force fed” by her mother, but at the same time, her family clearly is a major source of her love of food. What attitudes toward food were you brought up with? Butturini has strong feelings about how she raises her own daughter in relation to meals and eating. If you are a parent, have you been very cognizant of how you educate your children about food?

Do you find Butturini’s account of what happened to herself and John to be unsentimentally portrayed, or the opposite, or a mixture throughout the book? Discuss how much her profession and training as a journalist might have affected her telling of her own story.

Paula and John take their potted plants with them when they move from Italy to Poland; only the basil survives the climate change, though two years later it has transformed into a weaker and more bitter-tasting herb. Like these herbs, the author notes “the troubles that befall us alter, permanently, not only our view of the world but our position in it” (19). How did her troubles change her, for better or ill? Could it also be said that successes and triumphs also alter a person—and how would you apply this line of reasoning to the author herself and her family?