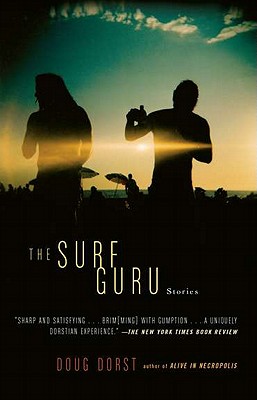 From the author of Alive in Necropolis "a brazen, roiling, confident collection." (Los Angeles Times).

This is a book of brilliant, adventurous stories from award-winning author Doug Dorst, widely celebrated as one of the most creative, original literary voices of his generation-an heir to T.C. Boyle and Denis Johnson, or a Northern Californian Haruki Murakami. Here in The Surf Guru, Dorst's full talent is on display.

Praise For The Surf Guru…

"The Surf Guru is one of the best collections I've read in years. Formally innovative, full of humor and terror and compassion in equal measure, and spanning an astonishing range of settings and characters, these stories renewed my faith in the short story as an art form. Dorst's work is utterly unique and visionary."
-Dan Chaon, author of Among the Missing and Await Your Reply

"The stories in The Surf Guru are unusual not just for the frequent genius of their conceits, but for the tremendous sympathy they demonstrate toward characters who struggle with love, loneliness, and disappointment. Doug Dorst writes with a big, unbridled imagination and a big, commiserating heart, and the results, by turns devastating and hilarious, are always deeply moving."
-Chris Adrian, author of The Children's Hospital and A Better Angel

Doug Dorst is the author of three books, most recently the novel S, which he co-authored with J. J. Abrams. He is the author of the novel Alive in Necropolis, which was honored as San Francisco’s 2009 One City One Book selection and as a runner-up for the 2009 PEN/Hemingway, Shirley Jackson, and IAFA/Crawford Awards, and a short story collection, The Surf Guru. His stories have appeared in McSweeney’s, Ploughshares, ZYZZYVA, and other journals. A graduate of the Iowa Writers’ Workshop and a three-time Jeopardy! champion, Dorst lives in Austin and teaches writing at Texas State University in San Marcos.
Loading...
or
Not Currently Available for Direct Purchase