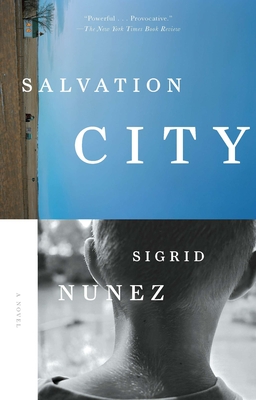 “A NOVEL FOR LIFE AFTER THE PANDEMIC…Scratches a particular imaginative itch that we are all experiencing at the precipice of a new era." -- The New Yorker

From the National Book Award-winning author of The Friend comes a moving and eerily relevant novel that imagines the aftermath of a pandemic virus as seen through the eyes of a thirteen-year-old boy uncertain of his destiny.

His family's sole survivor after a flu pandemic has killed large numbers of people worldwide, Cole Vining is lucky to have found refuge with the evangelical Pastor Wyatt and his wife in a small town in southern Indiana. As the world outside has grown increasingly anarchic, Salvation City has been spared much of the devastation, and its residents have renewed their preparations for the Rapture.

Grateful for the shelter and love of his foster family (and relieved to have been saved from the horrid, overrun orphanages that have sprung up around the country), Cole begins to form relationships within the larger community. But despite his affection for this place, he struggles with memories of the very different world in which he was reared. Is there room to love both Wyatt and his parents? Are they still his parents if they are no longer there? As others around him grow increasingly fixated on the hope of salvation and the new life to come through the imminent Rapture, Cole begins to conceive of a different future for himself, one in which his own dreams of heroism seem within reach.

Written in Sigrid Nunez's deceptively simple style, Salvation City is a story of love, betrayal, and forgiveness, weaving the deeply affecting story of a young boy's transformation with a profound meditation on the meaning of belief and heroism.

"Sigrid Nunez’s Salvation City is a novel from 2010 that grapples with the strange and intangible fallout of a global pandemic, imagining the kind of psychological impact that such an event can have...One of the biggest questions that the coronavirus pandemic has produced is how a period of prolonged isolation, compounded by an ambient anxiety of getting sick and a physical fear of all humans, will impact the development of children and adolescents. … Nunez is especially skilled at imagining just how strange it would be to form any kind of selfhood under these circumstances." -- The New Yorker

Sigrid Nunez is the author of the novels The Friend, The Last of Her Kind, A Feather on the Breath of God, and For Rouenna, among others. She has been the recipient of several awards including a Whiting Writers' Award, the Rome Prize in Literature, and a Berlin Prize Fellowship. She lives in New York City.
Loading...
or support indie stores by buying on