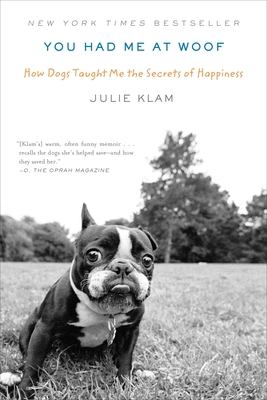 You Had Me at Woof

How Dogs Taught Me the Secrets of Happiness

The secrets of love, health, and happiness gleaned from a life lived with dogs.

Julie Klam was thirty, single, and working as a part-time clerk in an insurance company, unable to meet a man she could spend her life with. And then it happened: she had a dream about a Boston terrier- a dream that practically hit her over the head. The companion she needed was not necessarily the one she'd had in mind.

As fate would have it, a dog is exactly the thing that she needed. The New York Times bestselling You Had Me at Woof is the often-hilarious and always charming story of one woman's discovery of all she really needed to learn about life through her relationships with her canine companions. Klam shares how her love for dogs and the lessons she's learned caring for them has shaped her heart. This is a funny, earnest, and emotionally compelling look at the surprises, pleasures, and revelations that happen when you let any mutt, beagle, terrier, or bulldog go charging through your world.

Julie Klam grew up in Bedford, New York. After attending NYU's Tisch School of the Arts and interning at Late Night with David Letterman, she went on to write for such publications as O, The Oprah Magazine, Rolling Stone, Harper's Bazaar, Glamour, and The New York Times Magazine and for the VH1 television show Pop-Up Video, where she earned an Emmy nomination for Outstanding Special Class Writing. She married the show's producer, Paul Leo. They live with their daughter and three dogs in Manhattan.
Loading...
or
Not Currently Available for Direct Purchase