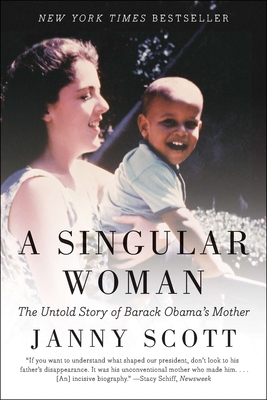 The New York Times bestseller-an unprecedented look into the life and character of the woman who raised a president.

Barack Obama has written extensively about his father but credited his mother for "what is best in me." Still, little is known about this fiercely independent, spirited woman who raised the man who became the first biracial president of the United States. This book is that story.

In A Singular Woman, award-winning New York Times reporter Janny Scott tells the story of this unique woman, Stanley Ann Dunham, who broke many of the rules of her time, and shows how her fierce example helped influence the future president-and can serve as an inspiration to us all.


Praise For A Singular Woman: The Untold Story of Barack Obama's Mother…

“An ambitious new biography. . . . Scott pursues a more perplexing and elusive figure than the one Obama pieced together in his own books.”—The New York Times Book Review

“Even Obama knew that he had not his extraordinary mother justice. Janny Scott . . . does. She portrays Dunham as a feminist, an utterly independent spirit, a cultural anthropologies, and an international development officer who surely helped shape the internationalist, post-Vietnam-era world view of her son. Scott’s book is tirelessly researched, and the sections covering Dunham’s life in Indonesia especially are new and valuable to the accumulating biography of Obama’s extended global family.”—The New Yorker

“Janny Scott packs two and a half years of research into her bio of Stanley Ann Dunham, the quixotic anthropologist who raised a president.”—People

“The restrained, straight-ahead focus—rather in the spirit, it turns out, of Dunham herself—pays off. By recovering Obama’s mother from obscurity, A Singular Woman adds in a meaningful way to an understanding of a singular president.”—Slate

“The key to understanding the disciplined and often impassive 44th president is his mother, as Janny Scott, a reporter for the New York Times, decisively demonstrates in her new biography A Singular Woman. . . . Scott [uses] meticulous reporting, archival research and extensive interviews with Dunham’s colleagues, friends and family, including the president and his sister. What emerges is a portrait of a woman who is both disciplined and disorganized, blunt-spoken and empathetic, driven and devoted to her children, even as she ruefully admits her failings and frets over her distance from them.”—The Washington Post

“Meticulously-researched and well-written . . . a necessary counterpart and corrective to Obama’s first book Dreams from my Father.”—Financial Times

“In her own right, Ann Dunham was a fascinating woman. . . . The story of the ‘singular woman’ at the center of this book is told, and told well, by Scott.”—San Francisco Chronicle

“What emerges in this straightforward, deeply reported account is a complicated portrait of an outspoken, independent-minded woman with a life of unconventional choices.”—USA Today

“We get a much fuller story of Ms. Dunham’s life in A Singular Woman, Janny Scott’s richly researched, unsentimental book.”—The New York Times

“If you want to understand what shaped our president, don’t look to his father’s disappearance. It was his unconventional mother who made him. . . . [An] incisive biography.”—Newsweek

“Scott gives us a vivid, affecting profile of an unsung feminist pioneer who made breaking down barriers a family tradition and whose legacy extends well beyond her presidential son.”—Publishers Weekly (starred)

Janny Scott was a reporter for The New York Times from 1994 to 2009, when she left to write this book. She was a member of the Times reporting team that won the 2000 Pulitzer Prize for national reporting.
Loading...
or support indie stores by buying on