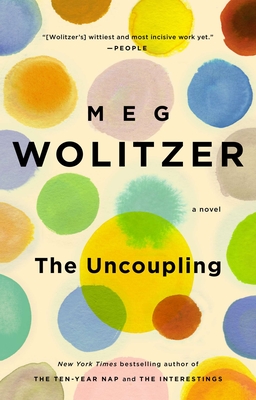 When the elliptical new drama teacher at Stellar Plains High School chooses Lysistrata as the school play-the comedy by Aristophanes in which women stop having sex with men in order to end a war-a strange spell seems to be cast over the school. Or, at least, over the women. One by one throughout the high school community, perfectly healthy, normal women and teenage girls turn away from their husbands and boyfriends in the bedroom, for reasons they don't really understand. As the women worry over their loss of passion and the men become by turns unhappy, offended, and above all, confused, both sides are forced to look at their shared history, and at their sexual selves in a new light.


Praise For The Uncoupling: A Novel…

"Wolitzer is a tender, engaging narrator. . . . This is the suburban comedy of Tom Perrotta in a flannel nightgown. The Uncoupling provides the charm of recognizing your own nervous tics and anxieties laid out by an author who's not out to get you."—The Washington Post

"In The Uncoupling, bestselling author Meg Wolitzer sets up a twenty- first century parable that blends the supernatural with the decidedly real. . . . The Uncoupling is a fast, fun read, and like all off-kilter thought experiments, it asks us to reexamine the experiences we accept unthinkingly as well as the very language we use to describe them. Desire is enchanting, but its sudden absence can feel like a curse."—NPR

"With her humorous voice, ecstatic prose, and unique historical backdrop, Wolitzer sheds light on the changing nature of female sexuality over time."—Daily Beast

"In Meg Wolitzer's superb new book, The Uncoupling a new drama teacher shows up in a small town and stages "Lysistrata," the ancient Greek play in which women decide to ditch their fellas until they put an end to the Peloponnesian War. The play casts a spell on the town, and soon husbands and boyfriends are out of luck."—The Atlanta-Journal Constitution

"Wolitzer's novel is funny and keenly observant. She uses the fantastic to externalize internal states that admit no easy description."—Santa Cruz Weekly

"Meg Wolitzer has a knack for inviting readers into the bedrooms of her protagonists and then slyly but oh so tastefully reminding readers that their (sex) lives are not so different from those of her fictional couples. . . . Wolitzer's talent is in her ability to use the sex strike to examine what makes marriages strong and what makes and break them, and it's not always about the sex."—USA Today

"At this point in her career, Meg Wolitzer deserves to be a household name. Every few years she turns out a sparkling novel that manages to bring the shine back to big, tarnished issues of gender politics, such as women's pull between work and family, or the role of sexuality in family dynamics."—San Francisco Chronicle

"Imagine that a high-school play could cast a spell, transforming not just its cast but also the faculty members around it, mysteriously changing their lives. Such is the irresistible premise of Meg Wolitzer's ninth novel, The Uncoupling, in which a suburban New Jersey community is altered by a production of Lysistrata . . . . The Uncoupling is a smooth and often enchanting read that reveals a wry understanding of modern relationships and generations."—The Seattle Times

"[Wolitzer] masterfully charts the peaks and falls of desire that naturally come with age. Brutally honest, and incredibly surreal, Wolitzer is able to perfectly tap into the female psyche by displaying to male and female readers alike what actually happens when the lights go off and the covers are turned down."—Bookpage

"A sage exploration of the role of sex in both sustaining and wrecking relationships. . . . Ours is an age when grown-ups read novels intended for teenagers, The Uncoupling is a book written for grown-ups that teenagers would do well to consult."—The Wall Street Journal

"[Wolitzer's] wittiest and most incisive work yet, she delivers a modern version of the ancient Lysistrata story. . . . Stunningly insightful, characteristically hilarious, Wolitzer's latest holds a mirror up to modern America, offering a shock of recognition amid the laughter."—People (four stars)

"What's great about Wolitzer is that she's neither too flip nor too serious about sex; The Uncoupling is hilarious, but the stakes are deeply felt- perhaps because the world of Stellar Plains is so vividly realized. . . . Wolitzer robs her characters of sex in order to explore what an essential, messy, needful role it plays in our lives."—Bust

"Women in a New Jersey community inexplicable stop having sex with their men in this sly homage to the Aristophanes classic Lysistrata."—O, The Oprah Magazine

"In The Uncoupling stealth feminist Meg Wolitzer expertly teases out the socio-sexual power dynamics between men and women."—Vanity Fair

"While zestfully exploring the nexus between complacency and desire, Wolitzer's hip, glib, impish scenario shrewdly examines the intricate connections between war and sex and perceptively illuminates the power of timeless literature."—Booklist (starred)

"Wolitzer's new novel, after The Ten-Year Nap and The Position, is another well-written and engrossing tale. And this one is definitely more of a tale than a story. In the town of Stellar Plains, NJ, a new, bohemian drama teacher arrives at the local high school. She selects as the school play Lysistrata, Aristophanes' comedy in which the women decide to stop having sex with their men to convince them to stop fighting in a war. As the actors rehearse, a cool wind of a spell passes through the women of Stellar Plains. It touches other teachers and students alike. The chill makes the women want to abstain from sex. So what happens when an entire town of women start to push away their men for no apparent reason? Otherwise happy couples break up. The novel flits from English teacher to gym teacher to the lead actress in the play and on and on. It reads and infects like a dreamy fairy tale with beautifully expressive and strangely enticing writing. Wolitzer again tackles a complicated and provocative subject, female sexuality, with creativity and insight. Her fans and readers of women's fiction that's smart and snappy will want this."—Library Journal (starred)

"Wolitzer makes it work, thanks to sharp characterizations and acute observations on everything from the digital generation gap to the accommodations made in a long marriage. . . . A risky strategy pays off for a smart author whose work both amuses and hits home."—Kirkus

"A high-school performance of Lysistrata has a mysterious effect: The women of a New Jersey town become increasingly disinterested in sex with their partners. In the alternately hilarious and poignant events that follow, couples reexamine their relationships."—Ms.

"Meg Wolitzer, like Tom Perrotta, is an author who makes you wonder why more people don't write perceptive, entertaining, unassuming novels about how and why ordinary people choose to make decisions about their lives....The Uncoupling is a novel that can't help but make you think about your own relationship--about what it consists of, what would be left if sex were taken away, how far you'd be prepared to go in order to keep it in your life somewhere, and so on."—Nick Hornby, The Believer

"Wolitzer writes of a spell cast upon a town-but she superbly casts it upon the reader as well. This deftly written tale of bewildered women (and their men) is always surprising and always engaging, both funny and serious at the same time, a wonderful read."—Elizabeth Strout, New York Times–bestselling author of Olive Kitteridge

"In this fiercely funny, playful and always tender novel, Meg Wolitzer glories in the drama and the magic of falling in and out of love... and bed.The Uncoupling is, happily, a very sexy fable about sexual ennui."—Cathleen Schine, New York Times–bestselling author of The Three Weissmanns of Westport

Think about the women in the novel. Each of them reacts to the loss of desire in a different way. How does each woman’s reaction reflect the stage of life she is in? Which woman do you think is the most changed at the end of the novel?

Willa and Miles both participate in an online world and communicate with each other electronically. How do you think electronic communication changes how relationships are built? Can it be a helpful tool? Can it be problematic?

Dory and Robby seem to be the perfect couple at the start of the book. How does the author signal that there might be problems beneath the surface? Think about other books you’ve read that feature married couples who start off happily married. How are those marriages similar to Dory and Robby’s? How are they different?

Neither Marissa nor Leanne is a committed relationship at the start of the book. How does the spell change their view of their own sexuality? How is it different from how the married women are changed?

The spell of course is fantasy, but think about real-life parallels. Are there examples in your life where you can see a similar “spell” at work? What are the causes? What are the solutions?