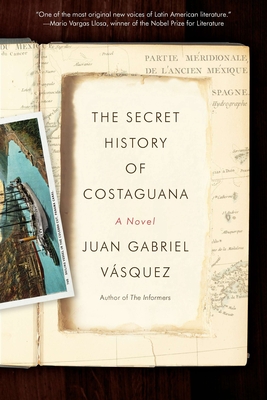 The Secret History of Costaguana

An ingenious novel of historical invention from the global literary star author of The Sound of Things Falling.

On the day of Joseph Conrad's death in 1924, the Colombian-born José Altamirano begins to write and cannot stop. Many years before, he confessed to Conrad his life's every delicious detail—from his country's heroic revolutions to his darkest solitary moments. Those intimate recollections became Nostromo, a novel that solidified Conrad’s fame and turned Altamirano’s reality into a work of fiction. Now Conrad is dead, but the slate is by no means clear—Nostromo will live on and Altamirano must write himself back into existence.

As the destinies of real empires collide with the murky realities of imagined ones, Vásquez takes us from a flourishing twentieth-century London to the lawless fury of a blooming Panama and back in a labyrinthine quest to reclaim the past—of both a country and a man.

Praise For The Secret History of Costaguana…

Praise for The Secret History of Costaguana

“An intricately detailed, audacious reframing of Nostromo, the classic 1904 Joseph Conrad tale of power, corruption, intrigue and revolution in a South American country he called Costaguana. The Secret History of Costaguana is a potent mixture of history, fiction and literary gamesmanship. Vásquez's themes are of the moment: powerful countries (the U.S. foremost among them) dabbling in Latin American politics, bribing politicians and journalists, trolling for profits; European writers appropriating history for their own tales. His particular triumph with this novel is to remind us, as Balzac put it, that novels can be ‘the private histories of nations.’” —Los Angeles Times

Juan Gabriel Vásquez's previous books include the Dublin Literary Award winner and national bestseller, The Sound of Things Falling, as well as the International Booker finalist The Shape of the Ruins, the award-winning novels The Informers, The Secret History of Costaguana, and the story collections Songs for the Flames and Lovers on All Saints' Day. Vásquez's novels have been published in twenty-eight languages worldwide. After sixteen years in France, Belgium, and Spain, he now lives in Bogotá.