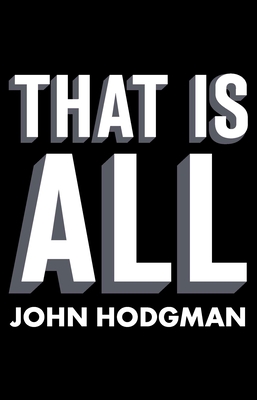 In 2005, Dutton published The Areas of My Expertise, a handy little book of Complete World Knowledge, marked by the distinction that all of the fascinating trivia and amazing true facts were completely made up by its author, John Hodgman. At the time, Hodgman was merely a former literary agent and occasional scribbler of fake trivia. In short: a nobody.

But during an interview on The Daily Show with Jon Stewart, an incredible transformation occurred. He became a famous minor television personality. You may ask: During his whirlwind tornado ride through the high ether of minor fame and outrageous fortune, did John Hodgman forget how to write books of fake trivia? The answer is: Yes. Briefly. But soon, he remembered!

And so he returned, crashing his Kansas farmhouse down upon the wicked witch of ignorance with More Information Than You Require, a New York Times bestseller containing even more mesmerizing and essential fake trivia, including seven hundred mole-man names (and their occupations).

And now, John Hodgman completes his vision with That Is All, the last book in a trilogy of Complete World Knowledge. Like its predecessors, That Is All compiles incredibly handy made-up facts into brief articles, overlong lists, and beguiling narratives on new and familiar themes. It picks up exactly where More Information left off—specifically, at page 596—and finally completes COMPLETE WORLD KNOWLEDGE.

Look out for John Hodgman's latest book, Vacationland, available from Viking in Fall 2017.

John Hodgman is a writer, comedian, and actor. He is the author of three New York Times bestselling books—The Areas of My Expertise, More Information Than You Require, and That Is All. After an appearance to promote his books on The Daily Show, he was invited to return as a contributor, serving as the show’s "Resident Expert" and "Deranged Millionaire." This led to an unexpected and, frankly, implausible career before the camera. He has performed comedy for the president of the United States, at a TED conference, and in a crypt in Green-Wood Cemetery in Brooklyn, New York. Finally, he is the host of the popular Judge John Hodgman podcast, in which he settles serious disputes between real people, such as "Is a hot dog a sandwich?" and "Should we tell our children the TRUTH about Santa Claus?" He also contributes a weekly column under the same name for The New York Times Magazine. He is currently working on a memoir, Vacationland, which will be published in October 2017.
Loading...
or
Not Currently Available for Direct Purchase