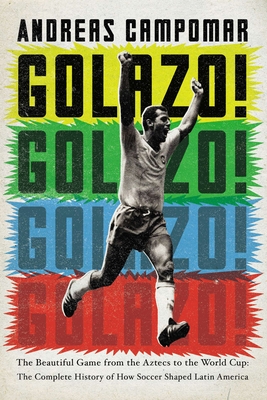 The Beautiful Game from the Aztecs to the World Cup: The Complete History of How Soccer Shaped Latin America

The definitive book about the national identities, heroes, and dramatic stories from Latin American soccer throughout history, perfect for World Cup reading.

Andreas Campomar offers readers the definitive history of Latin American soccer from the early, deadly Mesoamerican ballgames to the multi-billion dollar international business it is today. Golazo! explores the intersection of soccer, politics, economics, high and low culture, and how passion for a game captured a continent.

The triumphs, the heartbreaks, the origins and the future, the political and the personal—Golazo! is the perfect book for new fans and diehard followers around the world.


Praise For Golazo!: The Beautiful Game from the Aztecs to the World Cup: The Complete History of How Soccer Shaped Latin America…

"[A] sweeping exploration of soccer intersecting with politics, history, economics and culture in forging a continent’s passion." -- Steven Goff, The Washington Post

"The most comprehensive history of soccer in the part of the world in which it may well mean the most... A thorough, engaging history of the development of futbol and its place in Latin American society... Campomar effectively brings out the color and passion for the game, its evocative langauge, its artistic power and its sometimes-martial ugliness... He accomplishes his task with verve... Fine, scintillating history." -- Kirkus

"Perfection, pride, politics and punch-ups. The South American way of football has never been more readable." -- John Crace, ESPN and The Guardian

Andreas Campomar was educated at Cambridge University, where he studied Modern History. He is currently Publishing Director at Constable & Robinson in the United Kingdom. He reviews for The Daily Telegraph, Financial Times, Times Literary Supplement, and many others. He is the son of a Uruguayan diplomat and a descendant of Dr. Enrique Buero, the man who brought the first World Cup in Montevideo and later became vice president of FIFA. He lives in London.
Loading...
or
Not Currently Available for Direct Purchase