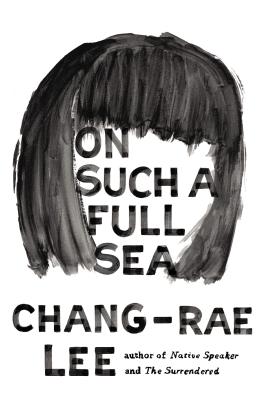 On Such a Full Sea

"Watching a talented writer take a risk is one of the pleasures of devoted reading, and On Such a Full Sea provides all that and more. . . . With On Such a Full Sea, Chang-rae Lee] has found a new way to explore his old preoccupation: the oft-told tale of the desperate, betraying, lonely human heart."--Andrew Sean Greer, The New York Times Book Review
"I've never been a fan of grand hyperbolic declarations in book reviews, but faced with On Such a Full Sea, I have no choice but to ask: Who is a greater novelist than Chang-rae Lee today?"--Porochista Khakpour, The Los Angeles Times
From the beloved award-winning author of Native Speaker and The Surrendered, a highly provocative, deeply affecting story of one woman's legendary quest in a shocking, future America.


On Such a Full Sea takes Chang-rae Lee's elegance of prose, his masterly storytelling, and his long-standing interests in identity, culture, work, and love, and lifts them to a new plane. Stepping from the realistic and historical territories of his previous work, Lee brings us into a world created from scratch. Against a vividly imagined future America, Lee tells a stunning, surprising, and riveting story that will change the way readers think about the world they live in.
In a future, long-declining America, society is strictly stratified by class. Long-abandoned urban neighborhoods have been repurposed as highwalled, self-contained labor colonies. And the members of the labor class--descendants of those brought over en masse many years earlier from environmentally ruined provincial China--find purpose and identity in their work to provide pristine produce and fish to the small, elite, satellite charter villages that ring the labor settlement.
In this world lives Fan, a female fish-tank diver, who leaves her home in the B-Mor settlement (once known as Baltimore), when the man she loves mysteriously disappears. Fan's journey to find him takes her out of the safety of B-Mor, through the anarchic Open Counties, where crime is rampant with scant governmental oversight, and to a faraway charter village, in a quest that will soon become legend to those she left behind.

Chang-rae Lee is the author of Native Speaker, winner of the Hemingway Foundation/PEN/Hemingway Award for first fiction; A Gesture Life; Aloft; and The Surrendered, winner of the Dayton Peace Prize and a finalist for the Pulitzer Prize. Selected by The New Yorker as one of the "20 Writers for the 21st Century," Chang-rae Lee is Professor professor in the Lewis Center for the Arts at Princeton University and the a Shinhan Distinguished Visiting Professor at Yonsei University.