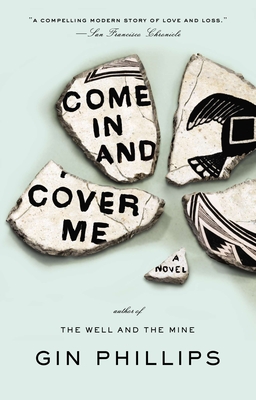 Come In and Cover Me

The moving story of a woman learning to let go of the past in order to move forward with her own future, from the author of Fierce Kingdom.

When Ren was twelve years old, she lost her older brother to a car accident. For twenty-five years he’s been a presence in her life, appearing with a song or a reflection in the moonlight. Her connection to the ghosts around her has made her especially sensitive as an archaeologist, understanding the bare outline of our ancestors, recreating lives and stories, and breathing life into those who occupied this world long before us. On the cusp of the most important find of her career, it is the ghosts who are guiding her way. But what they have to tell Ren about herself, and her developing relationship with the first man to really know her since her brother’s death, is unexpected—a discovery about the relationship between the past and the future, and the importance of living in the moment.

Praise For Come In and Cover Me: A Novel…

“With a sure hand . . . Phillips, weaves this strand of the supernatural through a compelling modern story of love and loss.”—San Francisco Chronicle

“Phillips’s writing is . . . brimming with imagery. . . . Her greatest talent is her ability to create the world of the story. Come In and Cover Me moves us into the earth. The dusty landscape serves as both setting and metaphor, a beautiful but dangerous place where a sudden loss of footing can prove fatal.”—Brunonia Barry, The Washington Post

“As graceful and emotionally true as Phillips’ debut—and, in its thoroughly researched reimagining of the American Southwest’s prehistoric Mimbres culture and its leap into supernatural territory without once losing its credibility or riveting story line, surpasses it. . . . Amid a sensually sketched setting of rock formations, mesquite and juniper, narrow canyons, and night skies, Ren and Silas work side by side and try to bridge the growing distance between them. As the natural and supernatural worlds coalesce, both recent and ancient history become more insistently present, yielding an original and strikingly beautiful ending.” Kate Christensen, Elle

“A smart, engrossing ghost story . . . Haunting, compelling and lyrical . . . A moving, well-crafted story brought to life through believable characters, vivid details and honest prose. Phillips has provided the reader with a true find—an ending surprising, satisfying and memorable novel that illustrates the power of good storytelling.”—Bookpage

“Moving. . . . Phillips adroitly sidesteps sentiment, enriching Ren’s world with depth and detail. While studying the Mimbres tribes of the Southwest, Ren utilizes her gift of seeing and communicates with ghosts at the sites she excavates to find out where to dig and how the uncovered artifacts were used. Ren’s passion for personalizing her work, attributing artifacts to specific individuals and striving to tell their stories, causes disagreements with Silas, who can’t believe her approach really works. In this and other exchanges, Phillips nicely illustrates the conflict between masculine reason and feminine intuition.”—Publishers Weekly

“Phillips handles Ren’s communication with ghosts with enough delicacy to be persuasive, enhances the appeal of archaeology by personalizing its discoveries, and vividly illustrates the need to share oneself with loved ones.”—Booklist

Gin Phillips is the author of the Barnes and Noble Discover Prize winning novel The Well and the Mine. She lives in Birmingham, Alabama.

While Silas and many others approach archaeology from a broad cultural perspective, Ren’s approach focuses on the individual personal lives of her subjects. How does her history inform her practice of archaeology? What is the benefit of pursuing individuals?

Scott’s appearances to Ren are usually announced by a snatch of music. How is Scott’s ghost a metaphor for the way we hold on to memories of lost loved ones? What kinds of things cause you to remember people you have lost?

Silas challenges Ren in a way that she has never been challenged before. How is he different from the other men that she has dated in the past? What does he offer her that those men did not?

Gin Phillips has chosen a quote from the Book of Ruth for her epigraph, and in many ways Lynay and Non’s story mirrors the story of Ruth. Think about female companionship in Come In and Cover Me. How important is it? What is the significance of the last line of the novel in this context?

Storytelling is deeply important to all of the characters. In what ways do their attitudes toward telling their own stories differ? Think about storytelling in a larger context. Why is it important that we tell stories about ourselves to other people? How does Ren’s refusal to share her past hinder her ability to be part of a community?

Phillips takes time to pay attention to the little moments between people, whether between Ren and Silas, Ren as a child and her family, or Ren and the group at the dig. How do these moments bind us together? Silas talks often about how communities are shaped by outside influences. How do we build our own communities from the inside?