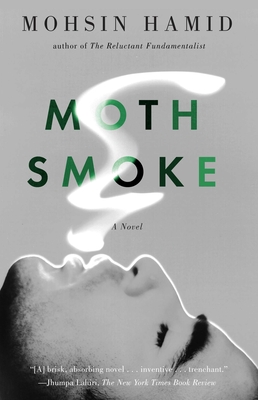 The debut novel from the internationally bestselling author of Exit West and The Reluctant Fundamentalist, both shortlisted for the Man Booker Prize

Moth Smoke, Mohsin Hamid’s deftly conceived first novel, immediately marked him as an uncommonly gifted and ambitious young literary talent to watch when it was published in 2000. It tells the story of Daru Shezad, who, fired from his banking job in Lahore, begins a decline that plummets the length of Hamid’s sharply drawn, subversive tale.

Fast-paced and unexpected, Moth Smoke was ahead of its time in portraying a contemporary Pakistan far more vivid and complex than the exoticized images of South Asia then familiar to the West. It established Mohsin Hamid as an internationally important writer of substance and imagination and the premier Pakistani author of our time, a promise he has amply fulfilled with each successive book. This debut novel, meanwhile, remains as compelling and deeply relevant to the moment as when it appeared more than a decade ago.

"A first novel of remarkable wit, poise, profundity, and strangeness… Hamid is a writer of gorgeous, lush prose and superb dialogue… Moth Smoke is a treat." –Esquire

"Pakistan, seventh most populous country in the world, is one of the countries whose literature has been overlooked. Now its chair has been taken, and looks to be occupied for years to come, by the extraordinary new novelist Mohsin Hamid." –The Philadelphia Inquirer

"A subtly audacious work and prodigious descendant of hard-boiled lit and film noir… Moth Smoke is a steamy and often darkly amusing book about sex, drugs, and class warfare in postcolonial Asia." –The Village Voice

"The most impressive of his gifts is the clearsightedness of his look at the power structure of a society that has shifted from the old feudalism, based on birth, to the new Pakistani feudalism based on wealth." –The New York Review of Books

"Brilliant… As relevant now as it was upon first publication twelve years ago." –The Millions

Mohsin Hamid is the author of the international bestsellers Exit West and The Reluctant Fundamentalist, both finalists for the Man Booker Prize. His first novel, Moth Smoke, won the Betty Trask Award and was a finalist for the PEN/Hemingway Foundation Award. His essays, a number of them collected as Discontent and Its Civilizations, have appeared in The New York Times, the Washington Post, The New York Review of Books, and elsewhere. He lives in Lahore, Pakistan.
Loading...
or support indie stores by buying on