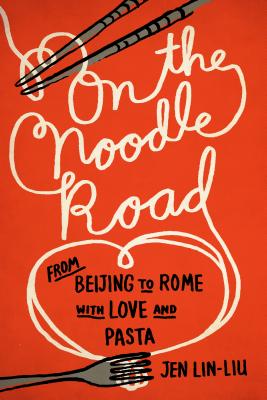 On the Noodle Road

From Beijing to Rome, with Love and Pasta

A food writer travels the Silk Road, immersing herself in a moveable feast of foods and cultures and discovering some surprising truths about commitment, independence, and love.
Feasting her way through an Italian honeymoon, Jen Lin-Liu was struck by culinary echoes of the delicacies she ate and cooked back in China, where she d lived for more than a decade. "Who really invented the noodle?" she wondered, like many before her. But also: How had food and culture moved along the Silk Road, the ancient trade route linking Asia to Europe and what could still be felt of those long-ago migrations? With her new husband's blessing, she set out to discover the connections, both historical and personal, eating a path through western China and on into Central Asia, Iran, Turkey, and across the Mediterranean.
The journey takes Lin-Liu into the private kitchens where the headscarves come off and women not only knead and simmer but also confess and confide. The thin rounds of dough stuffed with meat that are dumplings in Beijing evolve into "manti "in Turkey their tiny size the measure of a bride's worth and end as tortellini in Italy. And as she stirs and samples, listening to the women talk about their lives and longings, Lin-Liu gains a new appreciation of her own marriage, learning to savor the sweetness of love freely chosen.

Born inChicago andraised in Southern California, Jen Lin-Liu attended Columbia University and went to China as a Fulbright fellow.The founder of Black Sesame Kitchen, aBeijingcooking school, she is the author"Serve the People: A Stir-Fried Journey through China." She has written about food, culture, and travel for"The New York Times," "The Wall Street Journal," "Saveur," "Newsweek," "Travel + Leisure," and other publications. She lives inChengdu, China."