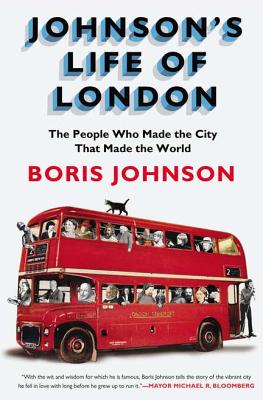 The People Who Made the City That Made the World

London is still the mother ship for Americans, many of whom share the opinion of its tousle-headed, bicycle-riding mayor - that indeed it's the best city in the world. And as the capital takes center of the world stage with the 2012 Olympics, who better than Boris (as he is known) to convey how London became one of the most exciting and influential places on Earth?
Wearing his brilliance and erudition with characteristic wit, Boris narrates the story of his city as a kind of relay race of outsized characters, beginning with the days when "a bunch of pushy Italians" created Londinium. He passes the torch on down through a procession of the famous and infamous, the brilliant and the bizarre - from Hadrian to Shakespeare to Florence Nightingale to the Rolling Stones- illuminating with unforgettable clarity each figure and the era he or she inhabited. He also pauses to shine a light on places and developments that have contributed to the city's incomparable vibrancy, from the flush toilet to the King James Bible. As wildly entertaining as it is informative, this is an irresistible account of the city and people that in large part shaped the world we know.

Boris Johnson is the very popular and internationally known Mayor of London. Educated at Oxford, he began his career as a journalist, writing for the Times and the Telegraph (for whom he still contributes a regular column), and working his way up to editor of the Spectator. He is the author of Johnson s Life of London (Riverhead, 2012) and The Churchill Factor (Riverhead, 2014). He was elected to the House of Commons in 2001 and served there until he was elected Mayor in 2008. Johnson is a regular on British television and radio. He lives in London with his wife and four children."