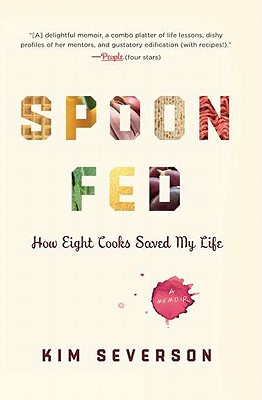 How Eight Cooks Saved My Life

Somewhere between the lessons her mother taught her as a child and the ones she is now trying to teach her own daughter, Kim Severson stumbled. She lost sight of what mattered, of who she was and who she wanted to be, and of how she wanted to live her life. It took a series of women cooks to reteach her the life lessons she forgot-and some she had never learned in the first place. Some as small as a spoonful, and others so big they saved her life, the best lessons she found were delivered in the kitchen.

Told in Severson's frank, often funny, always perceptive style, Spoon Fed weaves together the stories of eight important cooks with the lessons they taught her-lessons that seemed to come right when she needed them most. We follow Kim's journey from an awkward adolescent to an adult who channeled her passions into failing relationships, alcohol, and professional ambition, almost losing herself in the process. Finally as Severson finds sobriety and starts a family of her own, we see her mature into a strong, successful woman, as we learn alongside her.

An emotionally rich, multilayered memoir and an inspirational, illuminating series of profiles of the most influential women in the world of food, Spoon Fed is Severson's story and the story of the women who came before her-and ultimately, a testament to the wisdom that can be found in the kitchen.

Kim Severson has been a food writer for "The New York Times" since 2004. Previously, she was a food writer and editor at the "San Francisco Chronicle," where she received four James Beard Foundation Awards and the Casey Medal for Meritorious Journalism.

Praise For Spoon Fed: How Eight Cooks Saved My Life…

"[A] delightful memoir, a combo platter of life lessons, dishy profiles of her mentors and gustatory edification (with recipes!)."
-People (4 stars)

"A poignant story told with Severson's trademark humor and open-armed love of family and friends. Grab a few tissues, it's that sweet. If you're in need of life lessons, you'll find some to suit you. Spoon Fed pays homage to some remarkable women and whether Severson believes it or not, she is one, too."
-St. Petersburg Times