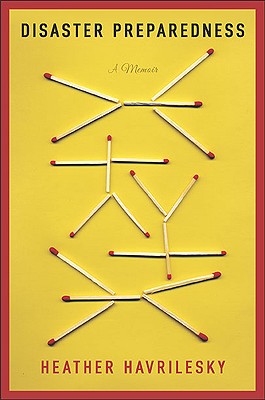 A perceptive, witty memoir about the transformative humiliations of childhood-and adulthood-from a unique, already-beloved voice.
When Heather Havrilesky was a kid during the '70s, harrowing disaster films dominated every movie screen with earthquakes that destroyed huge cities, airplanes that plummeted towards the ground and giant sharks that ripped teenagers to shreds. Between her parents' dramatic clashes and her older siblings' hazing, Heather's home life sometimes mirrored the chaos onscreen.
A thoughtful, funny memoir about surviving the real and imagined perils of childhood and early adulthood, "Disaster Preparedness" charts how the most humiliating and painful moments in Havrilesky's past forced her to develop a wide range of defense mechanisms, some adaptive, some piteously ill-suited to modern life. From premature boxing lessons to the competitive grooming of cheerleading camp, from her parents' divorce to her father's sudden death, Havrilesky explores a path from innocence and optimism to self-protection and caution, bravely reexamining the injuries that shaped her, the lessons that sunk in along the way, and the insights that carried her through.
By laying bare her bumps and bruises, Havrilesky offers hope that we can find a frazzled and unruly, desperate and wistful, restless and funny and frayed-at-the-edges way of staring disaster in the face, and even rising to meet it head on. By turns offbeat, sophisticated, uproarious and wise, "Disaster Preparedness" is a road map to the personal disasters we all face from an irresistible voice that gets straight to the unexpected grace at the heart of every calamity.

Heather Havrilesky is a staff critic for "The Daily." She was a TV critic at Salon for seven years, and co-created the cartoon "Filler" for Suck.com. Her writing has appeared in "New York" magazine, the "Los Angeles Times, Bookforum," the "New York Times," and on NPR's "All Things Considered."

Praise For Disaster Preparedness: A memoir…

"Heather Havrilesky's memoir Disaster Preparedness is about board games, inappropriate boyfriends, Star Wars, kickball, Amy Carter and chain stores - but it's also about life and death, and love and loss. I thought it was great."
-AJ JACOBS, author of The Year of Living Biblically and The Guinea Pig Diaries

"I love Heather Havrilesky's work, and have been reading her for years. She's smart, hilarious, unique-just terrific."
-ANNE LAMOTT

"Heather Havrilesky captures the weird, chaotic, innocent-but-also-jaded, sweet- but-also-kind-of-rancid essence of childhood in the 1970s. And if that's not enough, she takes us-hilariously, painfully, utterly relatably-through the entropy of being a teenager in the 1980s. At once sharp and tender, Disaster Preparedness both laments and salutes what it means to belong to a family- and indeed an entire culture-that seems inherently unmoored."
-MEGHAN DAUM, author of My Misspent Youth and Life Would Be Perfect If I Lived in That House