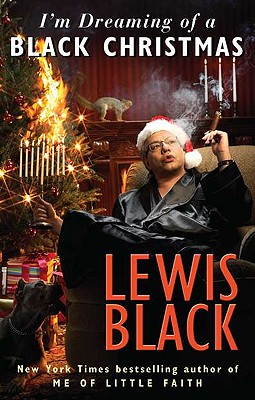 I'm Dreaming of a Black Christmas

From Lewis Black, the uproarious and perpetually apoplectic "New York Times"-bestselling author and Daily Show regular, comes a ferociously funny book about his least favorite holiday, Christmas.
Christmas is supposed to be a time of peace on earth and goodwill toward all. But not for Lewis Black.
He says humbug to the Christmas tradtitions and trappings that make the holiday memorable. In "I'm Dreaming of a Black Christmas," hishilarious and sharply observed book about the holiday, Lewis lets loose on all things Yule. It's a very personal look at what's wrong with Christmas, seen through the eyes of "the most engagingly pissed-off comedian ever."*
From his own Christmas rituals which have absolutely nothing to do with presents or the Christmas tree or Rudolph to his own eccentric experiences with the holiday (from aUSO Christmas tour to playing Santa Claus in full regalia), "I'm Dreaming of a Black Christmas" is classic Lewis Black: funny, razor-sharp, insightful, and honest.
You'll never think of Christmas in the same way.
"*Stephen King.


Praise For I'm Dreaming of a Black Christmas…

"[A] sweet and surprising take on the yuletide season."
—USA Today

Lewis Black is the hugely popular and "New York Times "bestselling author, stand-up comedian, actor, and playwright. Besides appearing regularly on "The Daily Show" (in his own segment, "Back in Black"), he has written and starred in a string of successful HBO and ComedyCentral specials and one-man Broadway shows. He's won a Grammy, an Emmy, and an American Comedy Award. Born near Washington, D.C., Black graduated from the University of North Carolina at Chapel Hill, and has a master's degree from the Yale School of Drama."