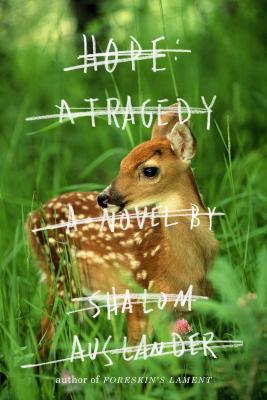 A" New York Times" Notable Book 2012
The rural town of Stockton, New York, is famous for nothing: no one was born there, no one died there, nothing of any historical import at all has ever happened there, which is why Solomon Kugel, like other urbanites fleeing their pasts and histories, decided to move his wife and young son there.

To begin again. To start anew. But it isn t quite working out that way for Kugel

His ailing mother stubbornly holds on to life, and won t stop reminiscing about the Nazi concentration camps she never actually suffered through. To complicate matters further, some lunatic is burning down farmhouses just like the one Kugel bought, and when, one night, he discovers history a living, breathing, thought-to-be-dead specimen of history hiding upstairs in his attic, bad quickly becomes worse.

"Hope: A Tragedy" is a hilarious and haunting examination of the burdens and abuse of history, propelled with unstoppable rhythm and filled with existential musings and mordant wit. It is a comic and compelling story of the hopeless longing to be free of those pasts that haunt our every present.

Shalom Auslander was raised in Monsey, New York. Nominated for the Koret Award for writers under thirty-five, he has published articles in "Esquire, The New York Times Magazine, Tablet, The New Yorker," and has had stories aired on NPR's "This American Life." Auslander is the author of the short story collection "Beware of God" and the memoir "Foreskin's Lament." He lives in New York City. To learn more about Shalom Auslander, please visit www.shalomauslander.com.