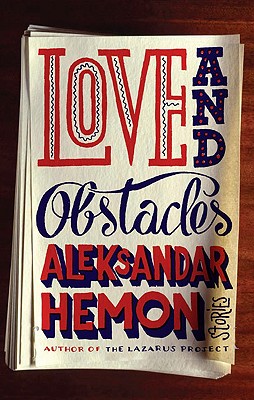 A new book of linked stories by the author of the National Book Award finalist "The Lazarus Project."
Aleksandar Hemon earned his reputation- and his MacArthur "genius grant"-for his short stories, and he returns to the form with a powerful collection of linked stories that stands with "The Lazarus Project" as the best work of his celebrated career. A few of the stories have never been published before; the others have appeared in "The New Yorker," and several of those have also been included in "The Best American Short Stories." All are infused with the dazzling, astonishingly creative prose and the remarkable, haunting autobiographical elements that have distinguished Hemon as one of the most original and illustrious voices of our time.
What links the stories in "Love and Obstacles" is the narrator, a young man who-like Hemon himself-was raised in Yugoslavia and immigrated to the United States. The stories of "Love and Obstacles" are about that coming of age and the complications-the obstacles-of growing up in a Communist but cosmopolitan country, and the disintegration of that country and the consequent uprooting and move to America in young adulthood. But because it's Aleksandar Hemon, the stories extend far beyond the immigrant experience; each one is punctuated with unexpected humor and spins out in fabulist, exhilarating directions, ultimately building to an insightful, often heartbreaking conclusion. Woven together, these stories comprise a book that is, genuinely, as cohesive and powerful as any fiction- achingly human, charming, and inviting.


Praise For Love and Obstacles…

"Bosnian-born Hemon (The Lazarus Project) again beautifully twists the language in this collection of eight powerful and disquieting stories. The 1992 Bosnian war colors in the background of all the tales, whose settings range from Africa to Chicago and Sarajevo. Arranged chronologically, all but one feature a Hemon-like narrator named Bogdan, first met as a surly teenager during his diplomat father's assignment in Zaire, where he's happily corrupted by a degenerate American espionage agent. In each successive story, Bogdan recalls the surreal and salient experiences of his life: his youth with his ironically depicted family; his early determination to be a poet, his accidental sojourn in America, where he was caught after the commencement of hostilities in Bosnia; and his return to a "cesspool of insignificant, drizzly suffering," where he has a transformative night interviewing a Pulitzer Prize-winning writer. Hemon arranges words like gems in a necklace. A necktie is "stretched across the chair seat, like a severed tendon"; a car is "stickered with someone else's thought"; a character's teeth are "like organ pipes." Writing with steely control and an antic eye, Hemon has assembled another extraordinary work."-Publisher's Weekly (starred review)

Aleksandar Hemon is the author of "The" "Lazarus Project," "Love and Obstacles, The Question of Bruno," "Nowhere Man "and "The Book of MyLives." He has been the recipient of a Guggenheim Fellowship, a MacArthur Genius Award, the Jan Michalski Prize for Literature, the PEN/W. G. Sebald Award, and, most recently, a 2012 USA Fellowship. He lives in Chicago."