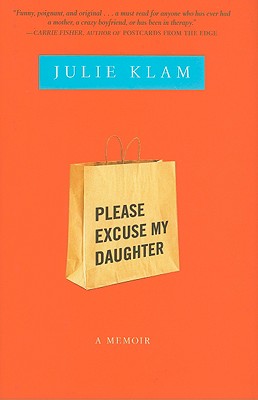 A woman's hilarious, bittersweet account of growing up in a family of career-shunning, dependence-seeking women and her journey to a state of twenty-first-century self-reliance.

Julie Klam was raised as the only daughter of a Jewish family in the exclusive WASP stronghold of Bedford, New York. Her mother was sharp, glamorous, and funny, but did not think that work was a woman's responsibility. Her father was fully supportive, not just of his wife's staying at home, but also of her extravagant lifestyle. Her mother's offbeat parenting style-taking Julie out of school to go to lunch at Bloomingdale's, for example-made her feel well-cared-for (and well-dressed) but left her unprepared for graduating and entering the real world. She had been brought up to look pretty and wait for a rich man to sweep her off her feet. But what happened if he never showed up?

When Julie gets married to a hardworking but not wealthy man-one who expects her to be part of a modern couple and contribute financially to the marriage-she realizes how ambivalent and ill-equipped she is for life. Once she gives birth to a daughter, she knows she must grow up, get to work, and teach her child the self-reliance that she never learned.

Delivered in an uproariously funny, sweet, self-effacing, and utterly memorable voice, Please Excuse My Daughter is a bighearted memoir from an irresistible new writer.

Julie Klam grew up in Bedford, New York. After attending NYU's Tisch School of the Arts and interning at "Late Night with David Letterman," she went on to write for such publications as "O, The Oprah Magazine, Rolling Stone, Harper's Bazaar, Glamour," and "The New York Times Magazine" and for the VH1 television show "Pop-Up Video," where she earned an Emmy nomination for Outstanding Special Class Writing. She married the show's producer, Paul Leo. They live with their daughter and three dogs in Manhattan.
Loading...
or
Not Currently Available for Direct Purchase