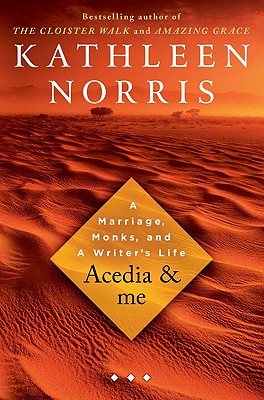 A Marriage, Monks, and a Writer's Life

View our feature on Kathleen Norris's "Acedia & Me."Kathleen Norris's masterpiece: a personal and moving memoir that resurrects the ancient term "acedia," or soul-weariness, and brilliantly explores its relevancy to the modern individual and culture.
Kathleen Norris had written several much loved books, yet she couldn t drag herself out of bed in the morning, couldn t summon the energy for daily tasks. Even as she struggled, Norris recognized her familiar battle with acedia. She had discovered the word in an early Church text when she was in her thirties. Having endured times of deep soul-weariness since she was a teenager, she immediately recognized that this passage described her affliction: sinking into a state of being unable to care. Fascinated by this noonday demon, so familiar to those in the early and medieval Church, Norris read intensively and knew she must restore this forgotten but utterly relevant and important concept to the modern world's vernacular.
Like Norris's bestselling "The Cloister Walk," "Acedia & me" is part memoir and part meditation. As in her bestselling "Amazing Grace," here Norris explicates and demystifies a spiritual concept, exploring acedia through the geography of her life as a writer; her marriage and the challenges of commitment in the midst of grave illness; and her keen interest in the monastic tradition. Unlike her earlier books, this one features a poignant narrative throughout of Norris's and her husband's bouts with acedia and its clinical cousin, depression. Moreover, her analysis of acedia reveals its burden not just on individuals but on whole societies and that the restless boredom, frantic escapism, commitment phobia, and enervating despair that we struggle with today are the ancient demon of acedia in modern dress.
An examination of acedia in the light of theology, psychology, monastic spirituality, the healing powers of religious practice, and Norris's own experience, "Acedia & me" is both intimate and historically sweeping, brimming with exasperation and reverence, sometimes funny, often provocative, and always important.

Kathleen Norris is the award-winning, bestselling author of Amazing Grace: A Vocabulary of Faith; The Cloister Walk; and Dakota: A Spiritual Geography. Her poems have appeared in The New Yorker, in various anthologies, and in her own three volumes of poetry. She divides her time between South Dakota and Hawaii.
Loading...
or
Not Currently Available for Direct Purchase