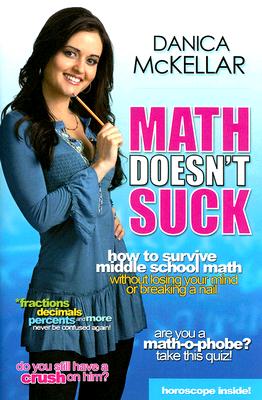 Read Danica McKellar's posts on the Penguin Blog
From a well-known actress and math genius a groundbreaking guide to mathematics for middle school girls, their parents, and educators
As the math education crisis in this country continues to make headlines, research continues to prove that it is in middle school when math scores begin to drop especially for girls in large part due to the relentless social conditioning that tells girls they can t do math, and that math is uncool. Young girls today need strong female role models to embrace the idea that it's okay to be smart in fact, it's sexy to be smart
It's Danica McKellar's mission to be this role model, and demonstrate on a large scale that math doesn t suck. In this fun and accessible guide, McKellar dubbed a math superstar by The New York Times gives girls and their parents the tools they need to master the math concepts that confuse middle-schoolers most, including fractions, percentages, pre-algebra, and more. The book features hip, real-world examples, step-by-step instruction, and engaging stories of Danica's own childhood struggles in math (and stardom). In addition, borrowing from the style of today's teen magazines, it even includes a Math Horoscope section, Math Personality Quizzes, and Real-Life Testimonials ultimately revealing why math is easier and cooler than readers think.

Best known for her roles on The Wonder Years and The West Wing, Danica McKellar is also an internationally recognized mathematician and advocate for math education. A summa cum laude graduate of UCLA with a degree in Mathematics, Danica has been honored in Britain s esteemed Journal of Physics and The New York Times for her work in mathematics, most notably for her role as co-author of a groundbreaking mathematical physics theorem, which bears her name (The Chayes-McKellar-Winn Theorem.) Her passion for promoting girls math education began in 2000, when she was invited to speak before Congress on the importance of women in math and science. Since then, Danica has made it a priority to find time in her busy acting schedule to promote math education, often appearing around the country as a speaker at national mathematics conferences."
Loading...
or
Not Currently Available for Direct Purchase