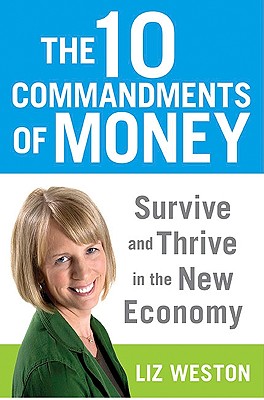 The 10 Commandments of Money

Survive and Thrive in the New Economy

From the #1 personal finance columnist on the Internet (Nielsen/NetRatings)-a clear prescription for financial health in the 2010s and beyond.
For previous generations, living within your means was a simple formula. Now, with the staggering rise in education, health care, and housing costs, millions of people find themselves skating from paycheck to paycheck with no idea how to move forward.
As the most-read personal finance columnist on the Internet, Liz Weston has heard the questions and has the answers. Her "10 Commandments of Money" will help readers avoid critical mistakes, survive the bad times, and thrive in the good ones. Just a few of Weston's invaluable pointers include how to:
Balance Your Budget
Pay Down Toxic Debt
Get the Right Mortgage
Pay for College
Save for Retirement
Maximize Your Financial Flexibility
Liz Weston's goal is to provide THE practical guide to the brave new world of money. What "Sylvia Porter's Money Book" was to the 1970s, "The 10 Commandments of Money" will be for the 2010s.
Watch a Video

Liz Weston is the most-read personal finance columnist on the Internet, according to Nielsen/NetRatings. Her twice-weekly columns for MSN Money generate 10 million page views each month. Millions more read her Q&A columns that appear in newspapers including the "Los Angeles Times" and the "Cleveland Plain Dealer" and she is now writing a regular column for AARP. She is a regular commentator on American Public Media s Marketplace Money and frequent contributor to National Public Radio s Talk of the Nation and All Things Considered. Her television appearances include Dr. Phil, Today Show, NBC Nightly News, Fox Business and CNBC s Power Lunch. In addition, Weston has a highly interactive following with readers engaged in multiple venues: her blog, her fan page on Facebook (17,000 fans and building), her followers on Twitter, and her readers on the Your Money message board, MSN s most active with thousands of daily postings."
Loading...
or
Not Currently Available for Direct Purchase