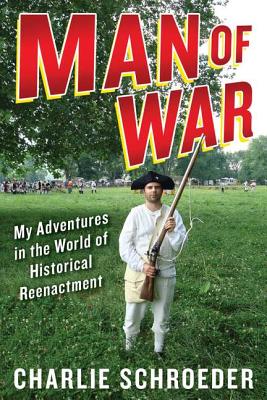 My Adventures in the World of Historical Reenactment

"
""Confederates in the Attic" meets "The Year of Living Biblically "in a funny and original memoir
In Arkansas, there is a full-scale Roman fort with catapults and ramparts. In Colorado, nearly a hundred men don Nazi uniforms to fight the battle of Stalingrad. On the St. Lawrence River, a group of dedicated history buffs row more slowly than they can walk along with author Charlie Schroeder, who is sweating profusely and cursing the day he got a book deal.
Taking readers on a figurative trip through time and a literal journey across America, "Man of War "details an ordinary guy's attempt to relearn history by experiencing it. Embedding with his fellow countrymen, Charlie Schroeder jumps headlong into the idiosyncratic world of historical reenactment. From encounters with wildlife and frostbite to learning more than he ever expected about guns, ammo, and buttons, Schroeder takes readers to the front lines of bloodless battles in order to show exactly how much the past has to teach us all about our present (and explain why anyone would choose to wear wool in a heat wave).

CHARLIE SCHROEDER is a writer, public radio producer, and actor. His writing has appeared in the "New York Times, Reader's Digest, " and "Los Angeles Times" as well as in Best American Sports Writing 2006. Radio stories he has produced have been featured on NPR, including "Weekend America, Only a Game, On the Media," and "Soundcheck." He lives in Los Angeles, California. Visit charlieschroeder.com.
Loading...
or support indie stores by buying on
(This book is on backorder)