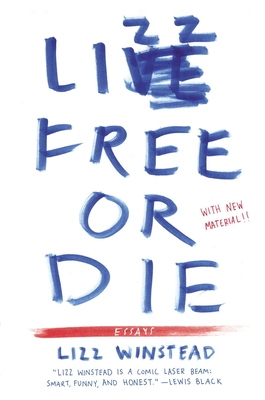 The hilarious and poignant account of how one woman found her comedic voice.

Growing up in the Midwest, the youngest child of Catholic parents, Lizz Winstead learned early that the straightforward questions she posed to various authority figures around her—her parents, her parish priest, even an anti-abortion counselor—prompted many startled looks and uncomfortable silences, but few plausible answers. Her questions rattled adults because they exposed the inconsistencies and hypocrisies in the people and institutions she confronted.

Yet she didn’t let that deter her. In Lizz Free or Die, Winstead vividly recounts how she fought to find her own voice, both as a comedian and as a woman, and how humor became her most powerful weapon in confronting life’s challenges.

Uproarious and surprising, honest and poignant, this no-holds-barred collection of autobiographical essays gives an in-depth look into the life and creativity of one of today’s most influential comic voices. In writing about her naive longing to be a priest, her role in developing The Daily Show, and her often problematic habit of diving into everything headfirst, asking questions later (resulting in multiple rescue-dog adoptions and travel disasters), Lizz Winstead has tapped an outrageous and heartfelt vein of the all-too-human comedy.

“Searching and lively … and moving. … Ms. Winstead writes with a feel for the sound of words.” – The New York Times

“Engaging…Winstead proves that she’s got a writer’s touch.”—Minneapolis Star Tribune

“A sometimes-hilarious look at a woman who often plunged into life without much forethought but kept on going.”—St. Paul Pioneer Press

“Lizz Winstead is a sharp-witted truth-teller, and Lizz Free or Die will inspire anyone who has ever talked back to the television or wished they could come up with satire as insightful as The Daily Show. It’s also a book about family, friendship and a zest for comedy that transcends political differences. In good times and bad, Winstead found her way by going toward the light and the laughter.”—Ms. Magazine

“Lizz Winstead is down-to-earth and wonderful and nice…read her book. You’ll start to think the same thing.”—Bust Magazine

“With this book, Lizz Winstead takes us on a hilarious, honest, moving and insightful journey. It is the journey of a funny, fearless woman as she finds her voice and shares it with the world.”—Arianna Huffington

“Reading Lizz Winstead's hilarious collection of very personal essays somehow leaves you changed.  You laugh, and yet there are nutrients in her words.”—Sarah Silverman

“Lizz Winstead has written a fantastically readable collection. I really did laugh, and then, I really did cry.  Most important, though, I found someone I can leave my dogs with, should I have to flee the country.” – Julie Klam

"Lizz Free or Die is brilliantly funny and razor sharp. Lizz Winstead observes our times with candor, hope and a gimlet eye. She is a national treasure."-- Adriana Trigiani

"Reading Winstead is like hanging out with Winstead: invigorating, infuriating, and hilarious." -- Patton Oswald

Lizz Winstead is co-creator and former head writer of The Daily Show and one of the founders of Air America Radio. A performer and stand-up comedian, she frequently appears on MSNBC, CNN, and Comedy Central. She lives in Brooklyn. Learn more at www.lizzwinstead.com or follow her on twitter @lizzwinstead.
Loading...
or
Not Currently Available for Direct Purchase