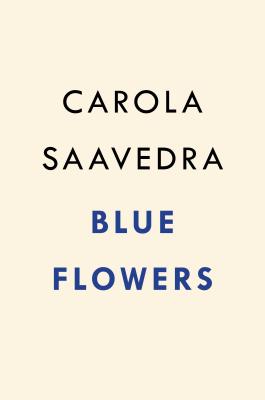 “Ravishing… as if Saavedra were a modern-day Borges.” —Luis Alberto Urrea, O, The Oprah Magazine

A novel of dark obsession, missed connections, and violent love.

Marcos has just been through a divorce and moved into a new apartment. He feels alienated from his ex-wife, from his daughter, from society; everything feels flat and fake to him. He begins to receive letters at his new address from an anonymous troubled woman who signs off as A. and who clearly believes she is writing to the former tenant, her ex-lover, in the aftermath of a violent heartbreak. Marcos falls under the spell of the manic, hypnotic missives and for the first time in years, something moves him.

Blue Flowers alternates between the letters detailing the dissolution of A.'s relationship, and Marcos' growing fixation with this damaged person. The letters become a kind of exorcism as both A.'s epistolary affair and Marcos' personal life reach a crisis point. Possessed by A., he is driven to discover her true identity. Blue Flowers is a dark portrait of desire, undermining accepted truths about love and sex, violence and fear, men and women.

Praise For Blue Flowers: A Novel…

“Ravishing… as if Saavedra were a modern-day Borges. Translated brilliantly from the Portuguese by Daniel Hahn, Blue Flowers plays out in a musical dance between A’s letters and the slow immolation of Marcos’s world as he grows addicted to them. It’s a mystery, yes. It might be a ghost story. It is sexy, and often unsettling. By the end, you could be forgiven for chewing your fingernails, wondering whether it’s all a figment of Marcos’s imagination. Or not.” —Luis Alberto Urrea, O, The Oprah Magazine

“Saavedra’s writing, particularly in the raw and vulnerable epistles, feels relentless and evocative in Hahn’s translation and creates intensity inside this tale shaped by characters strongly preoccupied with words and meaning. Thematically layered and psychologically demanding, this is a book for readers willing to explore uneasy relationship dynamics.” —Booklist

“Captivating… In chapters alternating between letters and Marcos’s reactions, Saavedra steadily unveils the darkness permeating the lives of her protagonists, and in doing so creates a literary psychological thriller that questions what is real and what is imagined. This tale of desire and yearning is impossible to put down.” —Publishers Weekly

“Blue Flowers is an elegant and unnerving meditation on the aftermath of love and the lasting power of desire. It's a bracing, fast read, one with a long afterglow and a dangerous lesson: that it may be that distance and removal are the only ways to learn about presence and proximity.” —Catherine Lacey, author of The Answers and Nobody is Ever Missing

“An enchanting and disturbing epistolary monologue charged with danger, mystery, desire, and longing, as seen through the eyes of a woman with nothing left to lose. This novel reminded me of Marais and Carrère in all the best ways—but better, and deeper, for its honesty and pure feeling. I can’t stop thinking about it.” —Lisa Locascio, author of Open Me

“Saavedra confirms her talent by using devices from the epistolary genre and transforming the reader into an accomplice in a plot full of tricks.”—O Estado de S. Paulo (Brazil)

“An astounding book.”—Gazeta do Povo (Brazil)

Carola Saavedra is the author of several novels in Brazilian Portuguese, including the award-winning Blue Flowers. She lives in Rio de Janeiro.

Daniel Hahn is an award-winning writer, editor, and translator with more than sixty books to his name. His translations (from Portuguese, Spanish, and French) have won him the Independent Foreign Fiction Prize and the International Dublin Literary Award and have been shortlisted for the Man Booker International Prize, among others.