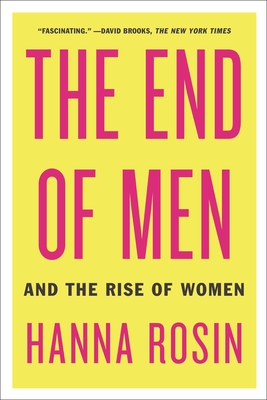 The End of Men

Essential reading for our times, as women are pulling together to demand their rights— A landmark portrait of women, men, and power in a transformed world.

“Anchored by data and aromatized by anecdotes, [Rosin] concludes that women are gaining the upper hand." –The Washington Post

Men have been the dominant sex since, well, the dawn of mankind. But Hanna Rosin was the first to notice that this long-held truth is, astonishingly, no longer true. Today, by almost every measure, women are no longer gaining on men: They have pulled decisively ahead. And “the end of men”—the title of Rosin’s Atlantic cover story on the subject—has entered the lexicon as dramatically as Betty Friedan’s “feminine mystique,” Simone de Beauvoir’s “second sex,” Susan Faludi’s “backlash,” and Naomi Wolf’s “beauty myth” once did.

In this landmark book, Rosin reveals how our current state of affairs is radically shifting the power dynamics between men and women at every level of society, with profound implications for marriage, sex, children, work, and more. With wide-ranging curiosity and insight unhampered by assumptions or ideology, Rosin shows how the radically different ways men and women today earn, learn, spend, couple up—even kill—has turned the big picture upside down. And in The End of Men she helps us see how, regardless of gender, we can adapt to the new reality and channel it for a better future.


Praise For The End of Men: And the Rise of Women…

"Rosin is a gifted storyteller with a talent for ferreting out volumes of illustrative data, and she paints a compelling picture of the ways women are ascendant." –Time

"Pinpoints the precise trajectory and velocity of the culture... Rosin’s book, anchored by data and aromatized by anecdotes, concludes that women are gaining the upper hand." –The Washington Post

"A persuasive, research-grounded argument... The most interesting sections in The End of Men show that in the portions of the country where, through culture and money, something like equality between the sexes is being achieved, the differences between them collapse." –Esquire

"Heralds the ways current economic and societal power shifts are bringing 'the age of testosterone' to a close and the consequences." –Vanity Fair

"Refreshing... Rosin's book may be the most insightful and readable cultural analysis of the year, bringing together findings from different fields to show that economic shifts and cultural pressures mean that in many ways, men are being left behind... The End of Men is buttressed by numbers, but it's a fascinating read because it transcends them... Rosin's genius was to connect these dots in ways no one else has for an unexpected portrait of our moment. The End of Men is not really about a crisis for men; it's a crisis of American opportunity." –The Los Angeles Times

"Especially timely... Rosin has her finger squarely on the pulse of contemporary culture... fresh and compelling." –USA Today

"[Rosin's] thorough research and engaging writing style form a solid foundation for a thoughtful dialogue that has only just begun... It's not the final word on gender roles in the 21st century, but it's a notable starting point for a fascinating conversation." –The Minneapolis Star-Tribune

"Ambitious and surprising... [The End of Men is] solidly researched and should interest readers who care about feminist history and how gender issues play out in the culture... A nuanced, sensitively reported account of how cultural and economic forces are challenging traditional gender norms and behavior." –The Boston Globe

"Makes us see the larger picture... this provocative book is not so much about the end of men but the end of male supremacy... The great strength of Ms. Rosin's argument is that she shows how these changes in sex, love, ambition and work have little or nothing to do with hard-wired brain differences or supposed evolutionary destiny. They occur as a result of economic patterns, the unavailability of marriageable men, and a global transformation in the nature of work." –The Wall Street Journal

"In this bold and inspired dispatch, Rosin upends the common platitudes of contemporary sexual politics with a deeply reported meditation from the unexpected frontiers of our rapidly changing culture." –Katie Roiphe, author of The Morning After and Uncommon Arrangements

"The End of Men describes a new paradigm that can, finally, take us beyond ‘winners’ and ‘losers’ in an endless ‘gender war.’ What a relief! Ultimately, Rosin's vision is both hope-filled and creative, allowing both sexes to become far more authentic: as workers, partners, parents... and people.” –Peggy Orenstein, author of Cinderella Ate My Daughter and Schoolgirls

"God's Harvard: A Christian College on a Mission to Save America, is a rare accomplishment for many reasons - perhaps most of all because Rosin is a journalist who not only reports but also observes deeply." –San Francisco Chronicle

“[Rosin] covers an impressive amount of ground about women… A great starting point for readers interested in exploring the intersecting issues of gender, family and employment.” –Kirkus Reviews

Hanna Rosin is a senior editor at The Atlantic and a founder of DoubleX, Slate’s women’s section. She has written for The New Yorker, The New York Times, GQ, The New Republic, and The Washington Post, and is the recipient of a 2010 National Magazine Award. Rosin lives in Washington, D.C., with her husband and three children.
Loading...
or
Not Currently Available for Direct Purchase